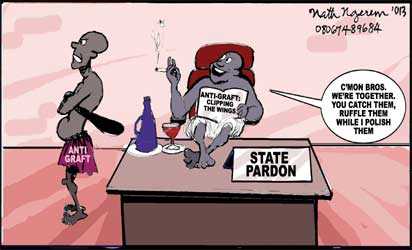 The Zoo (expired Nigeria) is one almighty contraption primed to produce concocted lies, falsified facts, full of corrupted, recycled retired and tired bunch of uneducated baboons and monkeys. The National Broadcasting Commission on Friday said that it had neutralised Radio Biafra.

The commission, in a statement in Abuja by its Director-General, Mr. Emeka Mba, said with the assistance of security operatives, it had confiscated the equipment of the radio station.

The statement read, “The commission has worked with other agencies to remove the transmissions of the illegal station from the satellite and this has put paid to the divisive and disruptive transmissions. We are working on the Internet transmissions.”

The NBC said that it appreciated the concerns expressed by Nigerians about the seditious activities of the radio station.

The commission reiterated its calls on the public to disregard the hate messages broadcast by the radio station. It also said that security operators had arrested operators of the radio and transferred them to Abuja.

“Some of the suspects involved in the illicit broadcasts have also been arrested and taken to Abuja for questioning and prosecution,” it said.