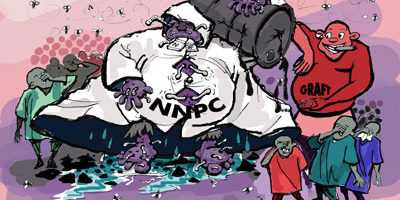 the alleged unremitted $20 billion to the federation account by Nigerian National Petroleum Corporation, NNPC, that his office lacked the constitutional power to carry out forensic audit on NNPC account.

Sanusi’s allegation and petition to the Senate Committee led to the ongoing probe of the missing fund where the Coordinating Minister for the Economy and Minister of Finance, Dr. Ngozi Okonjo-Iweala had told the committee that she was going to hire foreign experts for forensic audit of NNPC.

However, the Senate Committee on Finance invited the office of the Auditor General of the Federation to make its own submission as regards forensic auditing.

The Ahmad Makarfi-led Finance Committee had asked the Auditor General to explain the link between his routine checks in NNPC and the committee’s investigation.

The Committee specifically requested Ukura to furnish it with information on whether the periodic check his office was doing in NNPC had to do with the investigation it is currently carrying out.

However, the AGF in his submission before the committee said that the constitution in Section 85 Subsection 2 and 3 barred him from embarking on such an exercise, adding that what he could only do was a routine check of NNPC account.

Ukura said that already 20 chartered accountants had been deplored to the corporation to look into the financial records and establish if there were missing funds.

He said: “I want to refer you to Section 85 (2) of the constitution which says nothing in this section shall be construed as authorising the Auditor General to audit the account of, or appoint auditors for government statutory corporation, commission, authorities, agencies, including bodies established by the act of National Assembly.

“Subsection 4 says the Auditor General shall have power to conduct routine checks on all government statutory corporation, com-mission, agencies and so on.

“Going by the Section 3 of Subsection 8 (5), the Auditor General cannot do a forensic auditing of any of the government agencies.

“According to Section 4, what we are doing is a periodic check. 20 of my staff are there to do period check. We will provide the checklist.

“We are looking at the revenue generated and the expenditure.”

But Chairman of the Committee, Senator Makarfi asked the Auditor General to submit in writing before close on Friday (today) whether he has the manpower to do the auditing, adding “we will give you further directive if your letter did not cover what we are looking into.

“We want you to, in writing, confirm to us what you are checking in the NNPC accounts. Does it cover what we are looking for?

“We will only give further directives when you write letter to us to tell us whether or not what you are doing covered our own area of investigation.”