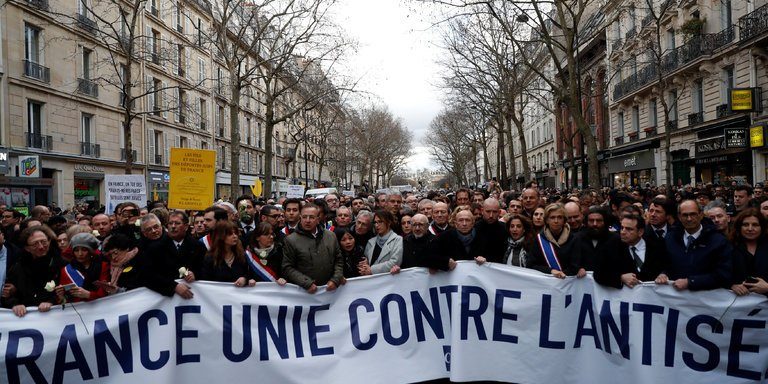 PARIS — Every morning, in a part of the 11th Arrondissement of Paris that has not yet gentrified, Mireille Knoll would sit at home watching television as she waited for her personal care aide.

The aide, Leila Dessante, would clean the small second-floor apartment, cook lunch and keep company with Ms. Knoll, a 85-year-old grandmother and Holocaust survivor. “She would take my face in between her hands and always ask, ‘How are you doing today, sweetheart?’” Ms. Dessante recalled on Wednesday.

Ms. Knoll’s gentle routine was brutally interrupted last week when she was killed in her apartment. The attack shocked her neighbors, France’s Jewish community and the country as a whole. Two suspects, men in their 20s, have been placed under formal investigation on charges of murder with an anti-Semitic motive.

The killing has raised questions about a persistent strain of anti-Semitism in France, “an anti-Semitism that remains, that transforms, that reappears, that mutates,” according to Édouard Philippe, the prime minister.

“She survived the Holocaust in the last century, I think she had a happy life, and yet she was killed at home in 2018, frail, and defenseless,” Ms. Dessante said as she was leaving Ms. Knoll’s apartment building after laying flowers on the doorstep. “What world are we living in?”

Thousands gathered in Paris on Wednesday to honor Ms. Knoll, marching from the Place de la Nation, on the eastern side of the capital, to her apartment building, a nondescript housing block where mourners had placed candles and flowers on the railings.

Many marched in silence, waving French flags or wearing badges with a picture of Ms. Knoll. Samuel Cohen, 74, who was at the march with his wife, Léa, 70, was one of several who carried a sign that read, “In France, we kill grandmothers because they’re Jewish.”

“It would be a little exaggerated to say that we are not safe in France today,” Mr. Cohen said. “Yet it’s true that we are worried, that it’s become hard to practice one’s faith in some areas, and that we’ve reached a new degree of anti-Semitism with this murder.”

Government officials attended the march, as did representatives of France’s main political parties, including the head of the far-right National Front, Marine Le Pen. She has been trying to shed her party’s racist and anti-Semitic past, but was booed at the march.

In 2015, she kicked Jean-Marie Le Pen — her father, and a founder of the National Front — out of the party for reiterating comments he had made previously that dismissed the Nazi gas chambers as a “detail of World War II history.”

The Representative Council of Jewish Institutions of France, one of the largest Jewish advocacy groups here, known by its French initials C.R.I.F., said ahead of the march that neither the far-left nor the far-right was welcome to join, arguing that anti-Semites were “overrepresented” on both extremes of the political spectrum.

But Daniel Knoll, one of Ms. Knoll’s two sons, said on Wednesday that everyone could come.

“The C.R.I.F. is playing politics, and I am opening my heart,” Mr. Knoll said on the French news channel BFM TV. “I open my heart to everybody, everyone who has a mother — which means everybody.”

“It’s unbearable, today in France, to know that someone can die like this, in such an atrocious way,” he said.

Ms. Knoll was stabbed 11 times, and her body was found partly burned after her attackers tried to set her apartment on fire. One suspect was a neighbor who had often been hosted by Ms. Knoll, while the other was a homeless friend of his.

An official close to the investigation, who was not authorized to speak publicly about the case, said that the friend had told investigators that he had heard Ms. Knoll’s neighbor say “God is great” in Arabic during the killing. But the official said the two suspects had given conflicting statements to the police.

The French authorities have suggested that Ms. Knoll might have been the target of a theft that escalated, for reasons that remain unclear.

But they have also characterized the attack as a worrying sign of anti-Semitism in France, which has been shaken by several recent episodes, including the killing last year of another elderly Jewish woman, Sarah Halimi, which the authorities were much slower to characterize as anti-Semitic.

Gérard Collomb, the interior minister, said on Tuesday that one of the suspects in Ms. Knoll’s murder had told the other, “She is a Jew, she must have money.”

“These are the stereotypes that are increasingly common in our society and that we must fight against,” Mr. Collomb told lawmakers in the National Assembly.

Ms. Knoll was a child in Paris when, in the summer of 1942, the French police cooperating with the Germans rounded up thousands of the city’s Jews, most of whom were later murdered at Auschwitz.

Her son Daniel was not immediately reachable on Wednesday, but in interviews with the French news media he described his mother, who had Parkinson’s disease, as a woman of limited means and boundless generosity.

“Everybody came to see her,” Mr. Knoll told Europe 1 radio. ”If she could have, she would have welcomed the entire world into her home.”

One of those frequent guests was one of the suspects, a neighbor who had known Ms. Knoll since he was a boy. “She was nice and naïve,” Mr. Knoll said. “She thought that everybody was good like she was.”

In another interview, Mr. Knoll said that on the day of the murder, his wife had found the neighbor with Ms. Knoll in her apartment, drinking port.

President Emmanuel Macron referred to Ms. Knoll’s killing at a ceremony on Wednesday morning that paid tribute to Lt. Col. Arnaud Beltrame and to the other victims of a terrorist attack in southern France last week.

France “is confronted today with a barbaric obscurantism, with the only goal of eliminating our liberties and our solidarities,” Mr. Macron said, drawing a parallel between the “terrorist in Trèbes” and Ms. Knoll’s killer, “who assassinated an innocent and vulnerable woman because she was Jewish.”

In an interview, Meyer Habib, a Franco-Israeli lawmaker in the National Assembly, said that “in the same day, I have a ceremony for a hero who gave his life to save a hostage, then I attend the funeral of an 85-year-old lady who was killed because she was a Jew, and then I’m going to honor her memory at a march.”

“That’s my schedule today, and I don’t find it normal,” he said.

Mr. Macron’s government recently announced plans to fight racism and anti-Semitism in France by focusing on prevention in schools and regulation of social media.

Back at Ms. Knoll’s apartment building, neighbors described her as a “typical Parisian lady” who would wear a hat and white gloves, and who used to get a haircut every two weeks — a “very coquettish, quick-witted lady who liked to gossip about the neighborhood’s life,” according to her hairdresser, Isabelle Sucher.

“She had a lot of style and was so chic, yet so nice,” said Marie-France Sauli, a 63-year-old neighbor who said she hadn’t been able to sleep since the killing. “To attack an old lady who would have never harmed anyone is so cowardly.”