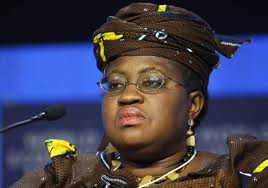 Minister of Finance and Supervising Minister of the Economy, Mrs. Ngozi Okonjo-Iweala, yesterday, said Nigeria’s economy is under threat, following the continuous decline in its Excess Crude Account.

Speaking in an interview at the World Economic Forum in Davos, Switzerland, Okonjo-Iweala said the depletion of the Excess Crude Account to about $2.5 billion, has made the country more vulnerable than it was in the past and put the economy of the country at great risk.

As a cushion against the depletion, she said, “We have tried to set the country’s main parameters in a very modest way. We have made our budget at a very reasonable benchmark price for oil.

“This is to shield us and to ensure we are not subjected to any volatility there may be in the oil markets.”

Okonjo-Iweala predicted a 6.75 per cent expansion in Nigeria’s economy this year, compared to a growth of 6.5 per cent in 2013, adding, however, that increased growth has also fuelled rising inequality in the country over the years.

She said: “In Nigeria we are growing very fast, but that growth has come with increasing inequality and lack of inclusion of certain segments of the population.”

The Excess Crude Account has been depleted from $8.65 billion at the end of 2012 to $2.5 billion currently, while Nigeria’s external reserves dropped 11 per cent from last year’s peak of $48.85 billion, recorded in May.

The Monetary Policy Committee of the Central Bank of Nigeria, CBN, had on Tuesday, after its bi-monthly meeting, expressed concerns over the depleting fund, saying that the absence of such fiscal buffers increases our reliance on portfolio flows thus, constituting the principal risk to exchange rate stability, especially with uncertainties around capital flows and oil price.”

Mr. Sanusi Lamido, Governor of the CBN, who read out the communiqué of the meeting, decried the continuous fall in revenue from oil despite stable price of oil and production in 2013, adding that although the committee acknowledged output losses due to theft and vandalism, this could not wholly explain the magnitude of the shortfall in revenue.

He said, “As a consequence, accretion to external reserves remained low while much of the previous savings have been depleted, thereby undermining the ability of the Central Bank to sustain exchange rate stability.”

The CBN, therefore, urged the fiscal authorities to block revenue leakages and rebuild fiscal savings needed to sustain confidence and preserve the value of the naira.

BY MICHAEL EBOH, WITH AGENCY REPORTS