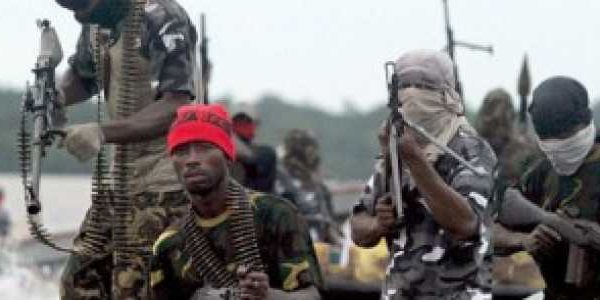 From Femi Folaranmi, YenagoaThe Movement for the Emancipation of the Niger Delta (MEND) has declared that its efforts to cripple Nigeria economy are in full swing. The militant group reviewing its operation between 20 and 26 October said several wellheads, feeder pipelines were damaged by ‘Hurricane Exodus’ in Bayelsa, Rivers and Delta States of Nigeria.

MEND spokesman, Jomo Gbomo in a statement while insisting that the group carried out the sabotage of the Warri Refinery claimed responsibility for the killing of three soldiers and a policeman at a border community between Rivers and Bayelsa states.

On the abduction of two American sailors off the Nigeria coast, MEND while disclosing that the kidnapped victims were in good

health, said all the security operatives in the area were killed.

The group also debunked the claim of the Douglas family that it did not pay any ransom for Mrs. Augusta Douglas Ayam release, stating that 200,000 US dollars was paid for her freedom.

It also dared ex-militant generals who have accepted amnesty to come out from comfort zone in Abuja and restore order in the creeks.

MEND shedding light on the two American sailors kidnapped explained that the action was to show their displeasure with the Joint Naval Exercise with foreign Navies in the Delta Region.

The statement reads in part: “The week under review (October 20 – 26, 2013) was very eventful. Several wellheads, feeder pipelines were damaged by ‘Hurricane Exodus’ in Bayelsa, Rivers and Delta States of Nigeria. The Nigerian National Petroleum Corporation (NNPC), which we earlier infiltrated with the full recruitment of a high level agent resulted in the successful sabotage from within on October 22, 2013. Throwing a ‘spanner in the works’ does not require rocket science or commando skills to execute. It only takes a belief in our cause to make things happen.

The Movement for the Emancipation of the Niger Delta (MEND) now has agents inside every oil company. In neighbouring Rivers State, on that same day the Warri Refinery was sabotaged, a Joint Task Force (JTF) escort gunboat was engaged in a shootout in the Andoni Local Government area. Contrary to the version given by the Nigerian Army spokesman, the soldiers were not ambushed but confronted and the attackers were not armed robbers but MEND fighters. The one-sided skirmish ended with the killings of three soldiers and a policeman.

In Brass, Bayelsa State, another boat belonging to the Joint Task Force (JTF) was attacked by another MEND team on the same day the two (2) American sailors, both of whom are psychologically and physically in good health, were abducted. All the security operatives were killed and their weapons collected. This incident has been conveniently concealed by the JTF.

It continued: “The sister of Mr. Oronto Douglas, Special Adviser to President Goodluck Jonathan on Research and Strategy was released unharmed as we promised. She however had developed high blood pressure and malaria during her captivity. Contrary to the claim the family made in a press statement that no ransom was paid, The Movement for the Emancipation of the Niger Delta (MEND) can authoritatively confirm that the sum of 200,000 US dollars was paid as ransom.

Some so-called ex-militants and jobless youths who have sold their birthrights for handouts were again paid to declare that militancy ended in 2009. As they continue to delude themselves, display their ignorance and irrelevance, the region, as can be seen by the world is in turmoil that can no longer be hidden. We dare the so-called ex-generals to come out from their hiding in Abuja into the creeks to restore order. Also the Niger Delta Amnesty Office in the Presidency issued a contradictory statement that MEND only exists on cyberspace. You may recall that this same office made a public appeal to MEND to refrain from our threat to attack mosques in retaliation to Boko Haram’s attacks on churches. They also made a private appeal for the Chevron Tank Farm in Escravos to be spared from mortar attacks, which were scheduled for October 01, 2013.

In the early hours of Wednesday, October 23, 2013, an armed auxiliary outfit (referred by the authorities as pirates), attacked a US flagged oil supply vessel and singled out the two (2) Americans on board. This action was also to show their disdain and content for an on-going Joint Naval Exercise with foreign Navies in the Delta Region. We have informed their abductors that Mr. Henry Okah would have wanted the men released as soon as possible.”

However, the Douglas family has punctured the claims by MEND saying there is no logic in its statement that 200,000 US dollars was paid for Mrs. Augusta Douglas Ayam release.

According to a family member who preferred anonymity, the kidnappers after their initial demand of N500 million had come down to N10 million which is a far cry from the 200,000 US dollars MEND claimed the family paid. He advised the public to disregard MEND statement as the family had issued a statement after her release in which it said they would want to put the incident behind them.