Meet Diego, the Centenarian Whose Sex Drive Saved His Species 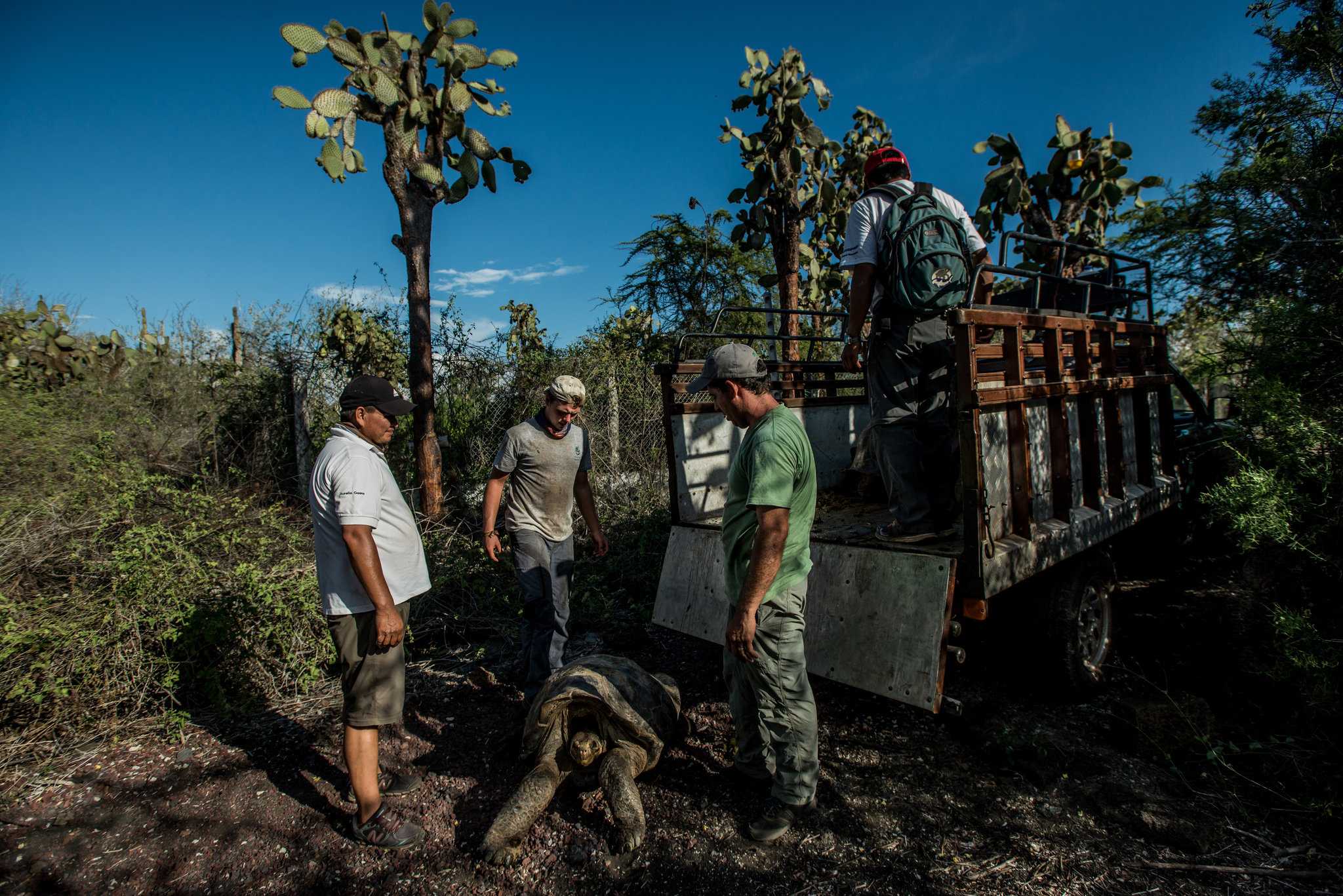 But maybe the real hope was elsewhere at the Darwin center.

Diego lounged in his pen with the females. His face was an old yellow color after four decades in the breeding pen, his shell looking like a house that could use a new coat of paint.

He craned his neck to look around him.

“If you give him the chance, he bites you,” warned Mr. Villalva, the breeding center manager.

Before long, Diego had found a female. The act did not look easy, like one boulder trying to roll over another. January to June is the mating season, Mr. Villalva explained.

But not that afternoon. The female backed off into the bushes, and Diego landed with a thud that sent dust flying. After a moment, he scooted away.

CHARLES DARWIN RESEARCH STATION, Galápagos — Of all the giant tortoises on these islands, where the theory of evolution was born, only a few have received names that stuck.

There was Popeye, adopted by sailors at an Ecuadorean naval base. There was Lonesome George, last of his line, who spent years shunning the females with whom he shared a pen.

And there is Diego, an ancient male who is quite the opposite of George.

Diego has fathered hundreds of progeny — 350 by conservative counts, some 800 by more imaginative estimates. Whatever the figure, it is welcome news for his species, Chelonoidis hoodensis, which was stumbling toward extinction in the 1970s. Barely more than a dozen of his kin were left then, most of them female.

Then came Diego, returned to the Galápagos in 1977 from the San Diego Zoo.

“He’ll keep reproducing until death,” said Freddy Villalva, who watches over Diego and many of his descendants at a breeding center at this research facility, situated on a rocky volcanic shoreline. The tortoises typically live more than 100 years.

The tales of Diego and George demonstrate just how much the Galápagos — a province of Ecuador — have served as the world’s laboratory of evolution. So often here, the fate of an entire species, evolved over millions of years, can hinge on whether just one or two individual animals survive from one day to the next.

Diego, and his offspring, are part of one of the most high-profile efforts to keep Galápagos tortoise populations thriving. The tortoise, estimated to be perhaps a century old, is one of the main drivers of a remarkable recovery of the hoodensis species — now more than 1,000 strong on their native island of Española, one of the dozen Galápagos islands.

His story stands in contrast to Lonesome George, who was perhaps the most famous Galápagos resident when he died in 2012, at about 100 years old. His species, Chelonoidis abingdonii, now lives only on T-shirts and postcards because George, found in 1971 by a snail biologist on the island of Pinta, never produced any offspring in captivity.

An estimated 11 of about 115 known animal species have gone extinct since scientists began keeping records on the Galápagos. But the establishment of a national park, and the efforts of scientists, mean that extinctions are now a rarity. Which is why the death of George was such a blow.

Scientists did all they could to coax more abingdonii out of George and his mates. Only when George had died did an autopsy reveal it wasn’t lack of potency that impeded his reproduction, but a more anatomical ailment affecting his reproductive organ.

“We don’t like to talk about it,” said James P. Gibbs, a professor of vertebrate conservation biology at the State University of New York College of Environmental Science and Forestry in Syracuse, and one of the world’s experts on the tortoises, only half joking.

Dr. Gibbs had returned to the Galápagos that week from upstate New York to bring the stuffed remains of George and several expensive air-conditioning units and UV filters that would preserve the reptile in perpetuity in a mausoleum of sorts on one of the islands.

Both George and Diego had shells much smaller than many other species, and long necks to reach the few cactuses growing on their wind-swept island. In a way, those small shells were a curse on both their houses: Abingdonii and hoodensis were easy prey for the buccaneers and whalers who poured onto their islands in previous centuries and saw only defenseless, slow-moving meals that could easily be carted away.

Nor did it help that the giant tortoises of the Galápagos can survive for up to a year in the hull of a ship, meaning they provided a near-endless supply of fresh meat as they were stacked below decks by the hundreds. They were even tossed overboard when a ship needed to lose ballast for a quick getaway.

Among those who dined on giant tortoise flesh: Charles Darwin.

“We lived entirely on tortoise meat, the breastplate roasted … with flesh on it, is very good; and the young tortoises make excellent soup,” Darwin wrote in 1839, near the peak of the tortoise plunder in which some 200,000 were killed or carried away from the islands.

In the end, finches led him to the theory of evolution, not tortoises.

“He may have eaten his best specimens,” Dr. Gibbs said.

The recovery of Diego’s hoodensis species also brings up a quandary, one that perplexed Darwin during his adventures in the Galápagos more than a century ago, when he studied the fauna.

As Diego produces more offspring, and as those he has produced reproduce with one another, the entire hoodensis species could begin to look like Diego.

Evolutionary scientists call this process the bottleneck effect — when survivors’ genes come to dominate the gene pool as populations rebound. It’s particularly true on islands like Española, where tortoises from other lines will not breed with Diego’s kin.

Tortoise experts were divided on what risk that presents for hoodensis on a recent afternoon. Dr. Gibbs called it a “dangerous zone,” where little genetic diversity could mean susceptibility to a dangerous disease or changes in habitat because of climate change.

But Linda Cayot of the Galápagos Conservancy dissented, saying island species on the Galápagos have a long history of being decimated to just a few survivors that rebounded without incident — like a population of giant tortoises that chose to live in the caldera of a volcano. After the volcano exploded 100,000 years ago, the tortoises bounced back and returned to the caldera.

“Every species came from a bottleneck,” Dr. Cayot said. “It’s what happens in the Galápagos.”

Dr. Gibbs noted that another male of Diego’s species, in captivity, is adding his own progeny to the gene pool, possibly even beyond the numbers of Diego. He has not been given as much credit, though, perhaps because he does not have a name. (He goes only by “Male No. 3.”)

Two days later, the scientists’ attention was back on George, whose embalmed body was being revealed for the first time on the Galápagos.

A kind of memorial ceremony was underway around dusk at the Charles Darwin center, attended by national park guards, air force officers and police officers. A government official stood to declare the tortoise’s body “cultural patrimony of the people.”

Someone presented a death mask of George, made shortly after he had died.

“It is a great honor to receive this relic,” said Fausto Llerena, George’s longtime caretaker, who spoke below a sign that read: “Lonesome George: A legacy, a future, a hope.”

But maybe the real hope was elsewhere at the Darwin center.

Diego lounged in his pen with the females. His face was an old yellow color after four decades in the breeding pen, his shell looking like a house that could use a new coat of paint. He craned his neck to look around him.

“If you give him the chance, he bites you,” warned Mr. Villalva, the breeding center manager.

Before long, Diego had found a female. The act did not look easy, like one boulder trying to roll over another. January to June is the mating season, Mr. Villalva explained.

But not that afternoon. The female backed off into the bushes, and Diego landed with a thud that sent dust flying. After a moment, he scooted away.