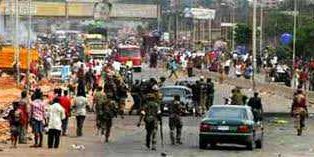 Onitsha in Anambra State, yesterday erupted in a turmoil following riots at the Old Motor Spare Parts market, Mgbuka along the

Onitsha-Owerri Expressway and the Upper Iweka-Niger Headbridge, within the nation’s commercial nerve centre.
The Upper Iweka riot began when a trailer driver who hails from the North allegedly killed an employee of the Anambra State Transport Agency (ASTA) at Ihiala.
The driver was flagged down by the deceased at a check-point in Ihiala and the driver allegedly refused to stop, which led to the ASTA operative jumping into the trailer while the driver immediately zoomed off.
An eyewitness, who does not want to be named said “the driver, an Hausa was stopped by the ASTA staff but he refused to stop. They tried to use other means to stop him when he tried to stop, the ASTA man then jumped into the trailer to direct the driver to clear off the road. When the man noticed that the ASTA man had entered, he zoomed off immediately. It was at that point that other members of the team started making calls until the driver was intercepted at the Headbridge on his way to cross the bridge, when the vehicle was searched, they discovered the lifeless body of the ASTA man with his hands tied behind him and fresh blood gushing out from his mouth and other parts of the body after sustaining injuries.”
However, at the Upper Iweka-Headbridge, youths suspected to be members of the Movement for the Actualisation of the Sovereign State of Biafra (MASSOB) on hearing the news, went on rampage and set the trailer ablaze while the driver was lucky as soldiers whisked him away to avoid lynching.
Though no Hausa was killed during the riots, other non natives especially Hausa residents in Onitsha started leaving the commercial city in droves with many of them doing businesses at the Bridgehead fleeing into Asaba, the capital of Delta State. Others were seen taking refuge at various police stations and 302 Artillery Regiment, Onitsha.
Also at the Mgbuka market, along Onitsha-Owerri Road, human and vehicular movements were delayed for hours when traders blocked the major road in protest against the alleged highhandedness of the leadership of the market.
Daily Sun had reported that Mgbuka market had remained closed on alleged orders of the chairman of the market, Mr. Ifeanyi, who claimed that MASSOB members had threatened to take over the market and collect revenue from traders.
Since January 3, 2014, the Old Motor Spare Parts market, Mgbuka had remained closed which led to yesterdays riot during which traders trooped out of the market, blocked the highway, making bonfire and disrupting both human and vehicular movements for several hours before security operatives arrived at the scene.
However, the MASSOB Director of Information, Uchenna Madu denied the group’s involvement in the traders’ riot at Onitsha-Owerri Road.