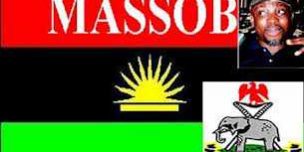 Palpable tension pervades the five states of the South East, following today’s sit-at-home order given by the Movement for the Actualisation of the Sovereign State of Biafra (MASSOB).

The pro-Biafran group had ordered all Igbo across the country and in Imo, Abia, Enugu, Ebonyi as well as Anambra states, to stay in their homes today, in protest of the killing of South easterners all over the country, especially in the North.

MASSOB also said that there will be no wedding, burial or any ceremony in Igboland today.

Reacting to this, the police has warned that any attempt to stop people from carrying out their legitimate duties would be resisted, while urging people in the South east to go about their normal businesses.

Following what has become a face-off, residents in the South East are apprehensive and afraid of what may happen should they disobey the MASSOB order.

In the five states of Igboland, some residents who spoke to Saturday Sun said they are at a loss as to what would happen.

“I am afraid, as I don’t know what will happen. This MASSOB people are troublesome. I would not want to open my shop and it will be vandalized,” said Emeka Okafor, a trader based in Enugu.

An Owerri resident, who pleaded anonymity stated that with the police order and MASSOB threat he would stay in home, not because of the sit-at-home order but to avoid trouble.

“ I remember that the first time MASSOB ordered for sit-at-home, some years ago, people complied. Those who did not regretted, as they were molested. I do not want to be a victim. I will stay in my house,” he stated.

Meanwhile, the police have warned MASSOB members against molesting members of the public, who would be going about their normal duties today, saying the full weight of the law would be brought on any person or group of persons found preventing residents from going about their businesses.

Also the police have called on residents to ignore the planned sit-at-home protest today and go about their normal businesses, assuring them of adequate protection.

Speaking with Saturday Sun in Aba yesterday, the Aba area commander, Rabiu Dayi, said police in Aba were ready to protect the lives and properties of residents and would not fold their arms to watch people he described as deviant members of the society to threaten the existing peace being witnessed in the area.

He said that any call for Nigerians to sit at home, which does not come from the federal or the state government, is criminal and unlawful; stressing that such call should be disregarded.