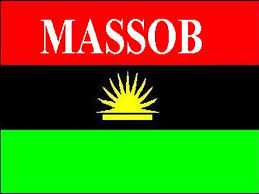 The leadership of Movement for the Actualisation of the Sovereign State of Biafra, MASSOB, has thrown its weight behind President Goodluck Jonathan

in the forthcoming presidential election.

The chief protagonist of MASSOB, Chief Ralph Uwazuruike made the position of his group known in Owerri, when he played host to the new leadership of All Progressives Grand Alliance, APGA.

“MASSOB is in agreement that President Jonathan should run for the 2015 presidential election. I call on Ndigbo to give full support to President Goodluck Jonathan in the forthcoming general elections,” Uwazuruike said.

While recalling that he made a similar call in 2011, Chief Uwazuruike also said it had become pertinent to repeat the call as Nigeria moved slowly towards 2015 general polls.

Giving reasons Igbos must continue to support President Jonathan, the MASSOB boss said: “whichever way you look at the issue and person involved, he is our brother. He buried our leader, Dim Chukwuemeka Odimegwu Ojukwu, in a very fashionable manner.”

Uwazuruike recalled how Jonathan gave Ojukwu a state burial, stressing that “with this, he won the hearts of Ndigbo.”

On the sagging fortunes of APGA, Uwazuruike lamented that “APGA is supposed to be a national party but the past leadership of the party sadly transformed it into a near family business.”

While noting that he was not a registered member of any political party, Uwazuruike, however, said that he remained interested in knowing what happened to Ndigbo in all the registered political parties in the country.

Speaking exclusively to Vanguard after the event, a chieftain of APGA, Professor Francis Dike expressed regrets that Chief Victor Umeh had been chairman of the party for more than 12 years, describing it as a disgrace to Igbo race.

“He has to go. We have had more than enough of him. We must replace Umeh; we have replaced him, if we must move forward,” Dike said.