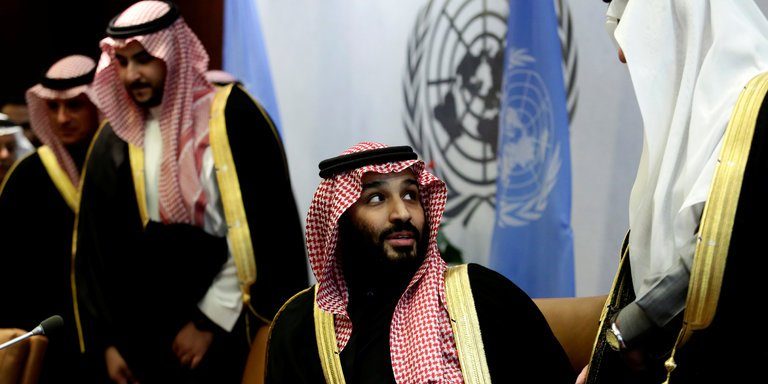 Last May, the private equity firm Blackstone announced that it was creating a $40 billion fund that would invest in infrastructure projects in the United States. The fund’s largest backer was the government of Saudi Arabia, which agreed to kick in half the cash.

Ten months later, the highly anticipated fund has yet to complete an initial round of fund-raising, much less start investing in infrastructure.

Although the Saudis promised to contribute up to $20 billion, Blackstone is required to raise a dollar from other investors for every dollar the kingdom’s Public Investment Fund puts in. So far, only two other investors have publicly committed to the fund, with their contributions totaling $575 million, according to data provider Preqin, which tracks such investments.

In the short term, Blackstone’s goal now is to raise a total of $15 billion — much less than it trumpeted during President Trump’s visit to Riyadh last spring — according to a document posted on the website of a Pennsylvania pension plan that has agreed to invest in the fund.

Facing hesitant investors, Blackstone has twice missed its own deadlines for completing the first round of fund-raising, according to people briefed on the plans and a timetable included in the Pennsylvania pension plan’s documents.

Among the factors that have complicated the fund’s launch: Saudi officials told Blackstone last year that they wanted to create an investment committee — including one or more Saudi representatives — that would oversee the fund, according to four people briefed on the talks who weren’t authorized to discuss them publicly.

The idea was a non-starter for Blackstone officials, who have consistently avoided outside influence over their investment decisions, said three of the people briefed on the talks.

“We’ve had a long and broad-based relationship with the Kingdom that’s, frankly, never been stronger,” said Christine Anderson, a spokeswoman for Blackstone. “They’ve been exceptional partners.” She declined to discuss the details of the firm’s fund-raising efforts, citing legal restrictions that apply during marketing periods.

A spokesman for the kingdom’s Public Investment Fund declined to comment.

Blackstone — whose co-founder and chief executive, Stephen A. Schwarzman, is a prominent supporter of President Trump — rushed to unveil the infrastructure fund during the pomp-filled presidential visit to Saudi Arabia last May. Wall Street titans including Mr. Schwarzman attended opulent ceremonies to celebrate the two countries’ financial and political ties.

The deal fit neatly into the White House’s efforts to coax foreign countries to invest in the United States. Blackstone’s president at the time, Hamilton E. James, predicted that the fund would spur infrastructure projects that would “create well-paying American jobs and will lay the foundation for stronger long-term economic growth.”

In the joint Blackstone-Saudi news release, H.E. Yasir Al Rumayyan, the head of the Public Investment Fund, said that the $20 billion Saudi pledge “reflects our positive views around the ambitious infrastructure initiatives being undertaken in the United States as announced by President Trump.”

The venture’s $40 billion target drew skepticism from Blackstone’s rival firms. But the company said it could pull it off. “Blackstone has the talent, scale and experience to be an effective private sector partner in filling the massive infrastructure funding gap,” Mr. James, now executive vice chairman of the company, said in the announcement.

In public, Blackstone is sticking with its goals of creating an immense fund and deepening its relationship with the Saudi regime, which has drawn criticism for its human rights record.

“We’re very confident in the long term we’ll reach the $40 billion capacity,” Mr. James told a group of reporters in February. He added that Blackstone hoped to hit that target “over the next decade or so.”

A week earlier, Mr. Schwarzman had heaped praise on Mohammed bin Salman, the crown prince of Saudi Arabia who chairs the kingdom’s Public Investment Fund. When Prince Mohammed was in New York last week, Mr. Schwarzman hosted a lunch for the prince at his New York home.

By February, the news release announcing the $40 billion fund had disappeared from Blackstone’s website, although a version remained on the Public Investment Fund’s site. (The release reappeared on Blackstone’s site on Wednesday after The Times asked about it.)

“They announced it with such fanfare and certainty, and clearly things were dragging,” said Colin C. Blaydon, director of the Center for Private Equity and Entrepreneurship at the Tuck School of Business at Dartmouth. “I wondered what on earth was going on. If anybody ought to be able to pull something like this off, you’d think Blackstone would be the one to do it.”

“For us, I think it was a good fit,” said Troy Searles, chief investment officer of the Louisiana fund. He said he liked the idea of focusing on North American infrastructure and thought Blackstone would succeed.

Last month, Mr. Schwarzman mentioned the fund-raising efforts at a New York investment conference with about 200 people in the room.

“We’re raising other money,” he said, according to a transcript of the event. He invited anyone in the audience who was interested to come forward after his speech. “Don’t be hesitant. Don’t be embarrassed.”