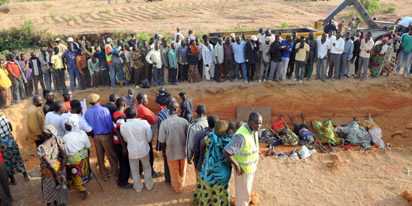 The remains of about 150 Southern Kaduna natives, were, yesterday, buried in a mass grave in Unguwant Gata, Maroa Chiefdom of Karua Local Government Area of the state, according to a local chief from the area.

Sankwai, Tekum and Unguwan Gata villages in Maroa Chiefdom were, Saturday, invaded by what villagers said were Fulani gunmen, killing no fewer than 200 natives and burning the three villages, after plundering them.

It was gathered that all Southern Kaduna villages  were sombre, over the attacks, as special prayers were offered for the deceased in all churches.

Meanwhile, the   Southern Kaduna Peoples Union, SOKAPU, the umbrella body for ethnic nationalities in the southern part of Kaduna State, has said that the people of the area, have no choice than to defend themselves against the frequent attacks and  killings by the Fulani gunmen.

Addressing newsmen, yesterday, in Kaduna, President of SOKAPU, Dr. Ephraim Goje, said that the persistent attacks and massacres of their people was a clear indication that the government  and the security agencies were not capable of  protecting them.

He said the people were being pushed to the wall as they were being killed and their homes and property destroyed, adding that it had become imperative for them to defend themselves by whatever means necessary.

Goje  said, “the Fulanis have unofficially declared war on our people. No community has the monopoly of violence, so our people are being pushed to a level that we may take certain actions aimed at defending ourselves and our land in order to put an end to this impunity and senseless killings.”

He added that over 5,000 people had been displaced in the 40 attacks on communities in the southern part of the state since 2011.

“We have identified the perpetrators as Fulani herdsmen as responsible for the attacks and killings, but each time we raise this observation, the Fulani socio-cultural organisations within the state have out-rightly denied the involvement of their people, asking for proofs.”

He added that two Fulani youths in Manchok led Saturday’s  attack, during which 219 people were killed, noting that the Fulani youths died in the process and their corpses were identified by the locals.

“The recent attack was led by two well known young Fulanis resident in Manchock town, who died in the process. Their dead bodies had clearly and unambiguously been identified by the natives and their corpses are now kept by the Joint Task Force, JTF, Command in Kafanchan for further forensic screening.

“This has clearly vindicated us and confirms our earlier position that the Fulanis have declared a jihad on the people of Southern Kaduna and Nigeria, evidenced by this genocide in Bondong, the murder in Katsina State, Birnin Gwari, Plateau, Zamfara, Taraba, Benue, among others.

“In some of these attacks, suspects had been arrested and handed over to security agencies for prosecution, only for the culprits to be seen working freely on the streets the next day.

“What comes to our minds now is that, truly, the Fulanis have unofficially declared war on our people. Let it be placed on record that no community has the monopoly of violence, so our people are being pushed to the wall and we may take certain steps aimed at defending ourselves and our land in order to put an end to this impunity,” Goje warned.

He lamented the lack of collaboration between security agencies in Kaduna and Plateau states, noting that the attackers often come in from the Plateau axis to attack Atakar and Marwa chiefdoms, which are bordering Plateau State, adding that each time they are chased by security agents from Kaduna State, they run to the Plateau where they walk freely to celebrate their so-called victories.