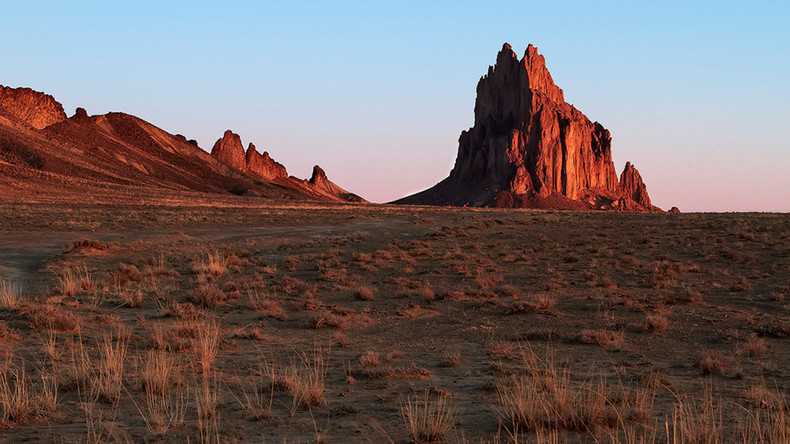 Any human colonization of Mars would center around the discovery or creation of water sources. Humans need great quantities of H2O to survive, and studying the geology of Mars may unlock clues to long-standing mysteries surrounding the Red Planet.

This image, captured by NASA’s Operational Land Imager (OLI) on Landsat 8, shows Shiprock in New Mexico on April 12, 2017. It is a 30 million-year-old volcanic formation that reaches almost 500 meters (1,620ft) into the sky.

Researchers believe it originally formed between 750 and 1,000 meters below the surface before violent hydrovolcanic activity blasted it forth like a huge ship cresting a wave in a stormy sea of molten rock.

When lava seeped down from the initial rock formation onto older rock below, it created what are known as ‘radial dikes,’ the large vertical walls seen spreading out from the central volcanic neck.

The intricate polygon structures observed on the surface of Mars are believed to have formed in much the same way.

“The features on Mars could be intrusive dikes like Shiprock,” said Laszlo Kestay, director of the Astrogeology Science Center for the US Geological Survey, as cited by NASA’s Earth Observatory blog.

“The region has plenty of volcanism and the Medusae Fossae Formation is easily eroded, making it a good host-rock for such features,” he added.

Scientists are divided on what the trigger mechanism for the Medusae Fossae may have been, however. Some have suggested that a meteorite may have hit an aquifer below the surface, while others believe a pyroclastic flow from a nearby volcanic eruption could have been responsible for the intricate polygon walls.

This image of the Gordii Dorsum section of the Medusae Fossae was captured by the High Resolution Imaging Science Experiment (HiRISE) camera on NASA’s Mars Reconnaissance Orbiter on April 9, 2010.

“For Shiprock, it is the classic location to show what is going on under the vents for a volcano,” Kestay said.

To date, there have been no major studies conducted specifically to compare and contrast the two formations, but such a study could yield more answers about Mars’ past and, particularly, shed light on what could have happened to water that may have existed both on and below the surface.