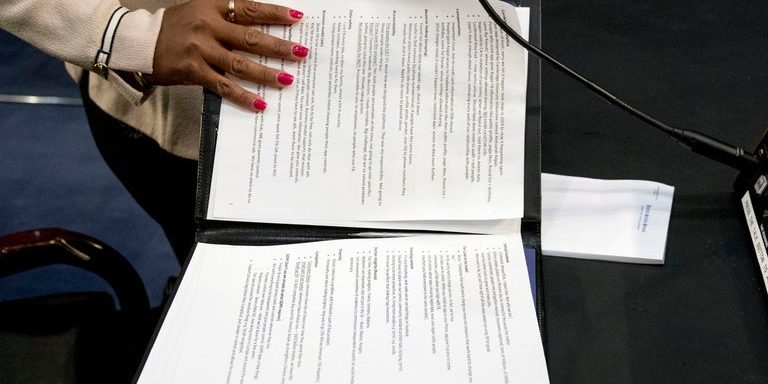 A photographer captured two pages of Mark Zuckerberg’s notes for his appearance at a Senate hearing on Tuesday. Once highlighted on Twitter, the image was retweeted thousands of times.

To many commenters, the paradox was clear. On a day Mr. Zuckerberg, the chief executive of Facebook, faced lawmakers’ questions about whether his company adequately protected users’ data, he experienced a disclosure of his own.

The talking points gave a detailed view of Facebook’s extensive preparations for the appearance before Congress of its billionaire founder. While some of the notes matched what he said on Tuesday, others reminded him what not to say or anticipated questions that were not raised. Mr. Zuckerberg will appear Wednesday for another day of testimony.

One section of the notes suggested responses in case Mr. Zuckerberg was asked if he would step down. He was not asked that question, but the suggested reply indicated he planned to stay.

“Resign?” read the notes, which were written in an abbreviated form. “Founded Facebook. My decisions. I made mistakes. Big challenge, but we’ve faced problems before, going to solve this one. Already taking action.”

The notes also included what Mr. Zuckerberg should say if asked whether Facebook should be broken up. “U.S. tech companies key asset for America,” was the suggested reply. “Breakup strengthens Chinese companies.”

Senator Lindsey Graham, Republican of South Carolina, asked if Facebook was a monopoly. But he did not press Mr. Zuckerberg on whether the company should be divided, and the answer citing Chinese competition was not used.

“You don’t think you have a monopoly?” Mr. Graham asked.

“It certainly doesn’t feel like that to me,” Mr. Zuckerberg replied.

Mr. Zuckerberg’s notes also guide a response to recent criticism from Tim Cook, Apple’s chief executive, who has described his own company as a far more robust defender of consumer privacy.

“Lots of stories about apps misusing Apple data, never seen Apple notify people,” read the notes. But Mr. Cook’s comments were not raised during the hearing, and the response was not used.

Another section warns Mr. Zuckerberg about comments to avoid. In response to any questions about European Union privacy and data protections, the notes instructed that he should not say Facebook already complies with a data privacy law that goes into effect in May.

The image was photographed by Andrew Harnik of The Associated Press and was included in a tweet from Stefan Becket, a senior news editor at CBSNews.com, that was shared widely.

“I took 70 photos of Zuck today,” Mr. Harnik wrote in response. “Leave it to the writers to love the photograph of pages of text.”

“He left it on the desk surrounded by probably upwards of 100 film and still cameras pointed at the desk from every direction,” he tweeted. “I do not think that constitutes an invasion of privacy.”

Photos of notes during official events have a long history of revealing more information than those who held them intended.

In 1975, a photograph of then-Secretary of State Henry Kissinger at the Helsinki Accords showed him reading a document with the heading “TOP SECRET SENSITIVE EXCLUSIVELY EYES ONLY CONTAINS CODE WORD.”

The document, which discussed diplomatic relations between France and North Vietnam based on a C.I.A. source with access to the French Foreign Ministry, undermined ties between Washington and Paris, Lawrence Martin-Bittman, a Boston University scholar, wrote in 1981.

More recently, President Trump was photographed during a meeting with parents, students and teachers who lost loved ones in the Parkland, Fla., school shooting holding notes that included the line, “I hear you.” The image raised questions about his ability to empathize with people who were grieving.