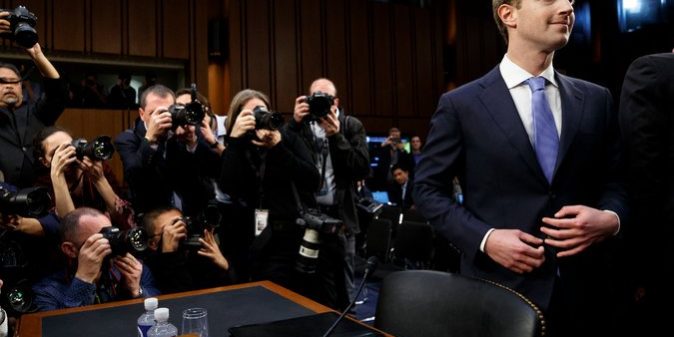 How do we know that Mark Zuckerberg, chief executive of Facebook and man currently under scrutiny, really does feel contrite and humbled by his company’s failure to protect users’ personal data, as he said during his testimony before Congress on Tuesday?

Well, he donned, if not a penitent’s robes, then what seems like his equivalent: a suit and tie.

It began on Monday, when Mr. Zuckerberg made the rounds of congressional leaders in a dark suit, white shirt and ink blue tie. On Tuesday, when he took his seat on the committee room floor, the suit was navy, and the tie was Facebook blue. It was somber. It was on brand.

And for someone who has made a professional and personal signature out of the plain gray tee and jeans — who has posted pictures of the row of gray T-shirts and hoodies hanging in his closet on his Facebook page; whose success has made those gray tees and hoodies into shorthand for a new generation of disrupters, as aspirational an outfit as a Savile Row suit once was — it was as much a visual statement of renunciation and respect as any verbal apology.

Cosmetic, perhaps. Superficial, sure. Presumably once he is back on the West Coast he’ll go right back to hoodies and tees. But it was strategic and optically effective nonetheless.

“As a symbolic gesture it was absolutely the right message,” said Alan Flusser, a tailor in New York and the author of “Clothes and the Man.”

It said to suspicious, establishment lawmakers: I am in your house, I will accept your rules. It said, O.K., maybe we in Silicon Valley really don’t know best. It said: I acknowledge the responsibility I bear and take this seriously. It acceded to the general interpretation that this was a growing-up moment, because in the iconography of clothing, the suit is the costume of the grown-up, while the T-shirt is the costume of the teenager, the off-duty, the breaker of rules.

It took away one of the signifiers of difference between the old guard and the new, and replaced it with an olive branch of similarity. (Mr. Zuckerberg’s suit and tie almost matched the suit and tie worn by John Thune, Republican of South Dakota, the chairman of the Senate Commerce Committee.)

And it closed off an avenue of attack; the day before Mr. Zuckerberg’s testimony, Larry Kudlow, President Trump’s new chief economic adviser, had said to reporters who asked about regulating Facebook: “Is he going to wear a suit and tie and clean white shirt? That’s my biggest question. Is he going to behave like an adult, as a major corporate leader, or give me this phony-baloney — what is it? — hoodies and dungarees?”

(At the time Mr. Kudlow was wearing a blue pinstripe suit, white pocket handkerchief, and had a blue scarf knotted like an ascot around his neck.)

Mr. Zuckerberg “knew people would be on the lookout” for the answer, said Joseph Rosenfeld, a personal style adviser who specializes in the tech world in Silicon Valley and New York, and whose clients work at companies such as Apple, Intuit and Google.

This was not, of course the first time Mr. Zuckerberg has worn a suit. It’s just that it is seemingly possible to count on two hands the times he has done so: always on public occasions and (not counting his wedding) always when heads of state or other dignitaries are involved. He wore a suit, for example, to address the G8 summit in France in 2011; to the state dinner for Chinese President Xi Jinping in 2015; to interview Indian Prime Minister Narendra Modi at Facebook the same year; and to testify in a Dallas courtroom during the Oculus intellectual property trial in 2017.

Still, it is such a rarity that former President Barack Obama made a joke out of it in a 2011 Facebook Town Hall, referring to an earlier meeting and calling himself “the guy who got Mark to wear a jacket and tie.”

And though we know the utterly plain gray cotton T-shirts and hoodies Mr. Zuckerberg favors are not nearly as simple as they seem — they come from Brunello Cucinelli, an Italian brand that specializes in what might be called utopian casual, and begin at about $295 (for the tee) — it’s a mystery where he gets his suits.

Much was written about his wife’s wedding dress after their wedding, but there was little about his dark suit. A Facebook spokeswoman declined to comment on his choice of suit for Congress. Mr. Rosenfeld said he had no idea of the maker or whether Mr. Zuckerberg was getting outside advice. A quick survey of my colleagues who work in Silicon Valley elicited only puzzlement. But over the years Mr. Zuckerberg’s suits have gotten skinnier, the ties narrower, the aesthetic less uncomfortable-kid-in-Dad’s-borrowed-suit.

That makes sense. Mr. Zuckerberg understands the role of image in communication. Facebook is, after all, a platform built largely on pictures. As Peter Thiel, the venture capitalist and Silicon Valley billionaire, wrote in his 2014 book, “Zero to One”: “It’s a cliché that tech workers don’t care about what they wear.” He went on: “Everybody from slackers to yuppies carefully ‘curates’ their outward appearance.”

Certainly Mr. Zuckerberg has publicly acknowledged, a few times, the very conscious way he uses clothes. Just because he is known for wearing the same thing every day doesn’t mean he doesn’t think about fashion or how what he wears gets interpreted. In fact, it is exactly the opposite.

“I wanted to signal to everyone at Facebook that this was a serious year for us,” he wrote in an post about the tie wearing. “My tie was the symbol of how serious and important a year this was, and I wore it every day to show this.”

Then, in 2014, during a Facebook Town Hall, he was asked about the gray tees, and responded: “I really want to clear my life to make it so that I have to make as few decisions as possible about anything except how to best serve this community. And there’s actually a bunch of psychology theory that even making small decisions around what you wear, or what you eat for breakfast, or things like that, they kind of make you tired and consume your energy.”

Which is to say, he wears the same thing because that way he thought about it once and never had to think about it again.

Though the current situation does somewhat demonstrate the limits of that approach.