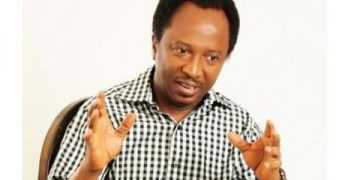 The President, Civil Rights Congress of Nigeria, Mallam Shehu Sani, has said that 70 per cent of problems bedeviling the North are caused by ex-presidents and leaders of northern extraction.

The remaining 30 per cent, Sani said, should be attributed to President Goodluck Jonathan’s administration’s sectional leadership and neglect of the North.

The CRCN boss described as a “waste” the number of years ex-heads of state and presidents of northern extraction had piloted the affairs of Nigeria.

He argued that they had not only failed to empower the region but ruined it educationally, socially as well as economically.

He said the past leaders such as Gen. Yakubu Gowon, Shehu Shagari, Generals Muhammadu Buhari, Ibrahim Babangida, the late Sani Abacha, Abdulsalami Abubakar, as well as the late Umaru Yar’Adua, all from the region only left behind trails of poverty, discords among the people of diverse faiths and ethnicity rather than development.

Sani, who is aspiring for the seat of the Kaduna Central Senatorial District on the platform of the All Progressives Congress, argued that President Jonathan only compounded the woes of the region while past leaders of the North simply left a region whose future was in doubt.

The activist said this while addressing sacked and unpaid workers of textile industries in the North who gathered on the premises of the Kaduna Textile Limited, in Kaduna State on Saturday.

He added that the President only empowered the people of the South-South on the detriment of other citizens of the country.

He said, “70 per cent of the North is destroyed by northern leaders and 30 per cent is being destroyed by Jonathan. We must take the blame and must tell ourselves the truth. Northern leaders had the opportunity to industrialise, to educate and to uplift the social standard of the region but they left behind a trail of poverty, of discord among people of diverse faiths and ethnic affinities.

“They were not able to do what Jonathan is doing by empowering the young and the Niger Delta militants who are being enriched today. It was a wasted opportunity which I believe should serve as a lesson next time when power is back to the region.”

While condemning the insurgency in the North, Sani noted that the only way out of the current challenges in the region was for its leaders to embark on rapid revival of its industries, agricultural sector as well as to harness the resources of the region, rather than over-depending on federal allocations.

He said, “I must at this junction condemn the ongoing violence in northern part of the country. This act of terror and the discord between the Muslims and Christians and the backwardness of the region must stop.

“We are concern that the northern part of Nigeria is today becoming a theatre of violence and mindless killings. If there are functional industries, educational system and leadership, the North could not have been where it is today.”

Earlier in his address, the General Secretary of the Coalition of Closed and Unpaid Textile Workers Association, Kaduna State, Mr. Ishar Iorngulum, had said the workers had decided to queue behind the candidature of Sani to become the next senator representing the Kaduna Central Senatorial District at the National Assembly in 2015.

He also said that they would mobilize their colleagues in other parts of the North to vote against some leaders in the region in the 2015 general elections.

Iorngulum, “It is the irresponsibility of the northern governors that led to the collapse of the textile industries in the North so we will vote against them in 2015 elections.”