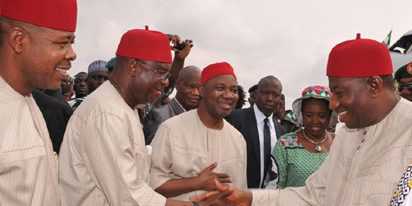 Thursday by President Goodluck Jonathan, said yesterday, that the president’s greatest failing was that he is “surrounded by people who are extremely incompetent, who are extremely fraudulent and whom he trusts”.

Mallam Sanusi, who spoke to Agence France-Presse (AFP), on a day the ruling Peoples Democratic Party and the opposition All Progressives Congress traded tackles on the propriety of suspending him, appeared resolute in his allegations against the Nigerian National Petroleum Corporation, NNPC, declaring that, “if I am sacrificed in whatever way, my freedom or my life… if it does lead to better accountability it will be well worth it”.
In an interview with AFP in Lagos, Sanusi said many of the people advising Jonathan are sycophants who do not speak frankly about the extent of corruption in government.

He said: “When you sit with President Jonathan himself, he appears a nice, simple person, who is trying his best to do his best. However, his greatest failing obviously is that he is surrounded by people who are extremely incompetent, who are extremely fraudulent and whom he trusts.”

The former CBN governor, who learnt of his removal while he was attending a regional meeting of CBN governors in Niger Republic, immediately returned to the country and had his passport seized by the Directorate of State Services, DSS. Last Friday, he secured a temporary order from the Federal High Court, Lagos barring the DSS or the police from arresting him.

Speaking on the seizure of his passport, Sanusi said: “I thought taking away my passport was the beginning of infringement on my fundamental human rights,”explaining that he had already sought court protection over it.

Regarding the allegations against him, Sanusi said he had earlier this year heard of a report condemning his performance and wrote to President Jonathan in “June or July” asking if an explanation was needed, but that he received no reply. According to him, the “first time I was formally notified about the allegations was the day I was suspended”, arguing that it would be too simple to describe his removal as payback for his attacks on the NNPC.

He further said: “Since 2009, I have been annoying the government. You’ve got people who think I have the wrong friends, people who think maybe I have not distanced myself enough from people who are seen to be opposition figures”.

On his face-off with the NNPC, Sanusi told the AFP that the extent of the graft may have reached a historic height, saying, “I think everybody has known that NNPC is rotten. I don’t think it has ever been as bad as this”.
According to Sanusi, the so-called kerosene subsidy money in fact pays for “private jets…yachts… and expensive property in Beverly Hills and Switzerland.”

Sanusi ruled out running for elected office, but said he may still have a future in public service.

In the short term, he expressed his readiness to face any attacks that may be coming from those he said are committed to preserving the status quo in a nation where, despite massive oil wealth, most people live in abject poverty.

Few hours after Sanusi was suspended, the president appointed Mrs Sarah Alade as Acting governor, while forwarding the name of Mr Godwin Emefiele to the Senate for approval as the new CBN governor.

Jonathan has no power to remove Sanusi —Amaechi

Meanwhile, Governor Rotimi Amaechi of Rivers State has also condemned Sanusi’s suspension. Speaking, yesterday, at Christ Church, Port Harcourt during a service organized for the Induction of the Resident Minister, Governor Amaechi said, “you can imagine how President Jonathan announced the sudden removal of the CBN Governor. He does not have such powers.

He knows that nothing will happen that was why he took that action. So, I think the preachers should begin to preach what we call the liberation theology. You (church leaders) are supposed to have more responsibilities to hold government accountable,” Amaechi said.

Speaker of the House of Representatives, Aminu Tambuwal, in his reaction to Sanusi’s removal described the development as a bad signal. Speaking with newsmen in Abeokuta after holding a private discussion with former President Olusegun Obasanjo, Tambuwal said, “whether it is lawful, legal or  illegal, the personality involved has told everybody that he is going to court and I believe he is already in court on that suspension.

“On the implications for the economy, I am not an economist, but  I personally feel  that, it will definitely send wrong signals to investors because we need to have confidence in the financial institutions particularly the independence of financial institutions of a country before foreign investors may consider such a country worthy of their  investments, I have my concern about that”.

All Progressives Congress, APC, on its part accused the presidency of seeking to use it to divert attention from the claim of missing $20 billion oil funds.

APC’s Interim National Publicity Secretary, Alhaji Lai Mohammed, in a statement, yesterday, said the way the presidency had been campaigning to malign Sanusi, using the report of the obscure Financial Reporting Council of Nigeria, showed that it was working hard to sweep the issue of the missing funds under the carpet and punish Sanusi for daring to expose the fraud.

On the allegations against Sanusi, it said the Federal Government should charge him to court, if indeed it was convinced of the veracity of the allegations, instead of “convicting him on the pages of newspapers and mob-lynching him through paid hatchet men.”

The party maintained that if the Federal Government had used half the energy it had been deploying to discredit Sanusi toward the investigation of the missing oil funds, the monumental corruption case would have been solved by now.

“Irrespective of the tepid and unconvincing denial by the presidency, it is clear that the main reason the presidency moved against Sanusi was because he blew the lid on the 20 billion dollars funds which the NNPC allegedly failed to remit to the Federation Account.

“Fortunately, discerning Nigerians are not hoodwinked by the Presidency’s choreographed mudslinging against a whistle blower, and the sponsored campaign that amounts to shooting the messenger just because his message is not palatable.”

The Peoples Democratic Party, PDP, however warned that the suspension of Sanusi must not be politicized by the political class, especially the opposition.

The party said the suspended Sanusi has nothing to fear if his hands are clean and has  no skeleton in his cupboard.

In a statement, yesterday by PDP National Publicity Secretary, Chief Olisa Metuh, the party while hailing the action of President  Jonathan in sacking the apex bank governor, stressed that  the issues leading to Sanusi’s suspension strictly bordered on the management of the nation’s economy.

Metuh who  urged Nigerians to disregard those attempting to politicise or introduce sentiments into the matter, said, the PDP  has “implicit confidence in President Jonathan and his efforts to ensure the stability and growth of the economy” adding that the decision was in the best interest of the nation.

The party also dismissed insinuations that the suspension was aimed at silencing a whistle blower and promoting corruption, adding that, “ after thorough analysis,it was clear that the decision was in tandem with the commitment of the Federal Government to safeguard the CBN and the entire financial sector from abuses.”

The PDP said the findings of the Financial Reporting Council revealed series of administrative recklessness in the CBN which are “very weighty and cannot be swept under the carpet of politics and sentiments.”

Debunking suggestions that the suspension will negatively affect the economy, the party spokesperson  observed that instead, it has restored confidence in the financial sector and in Government’s ability to check abuses harmful to the system.

It therefore urged Nigerians not to be swayed by those seeking to play politics with the matter.