Malaysian PM says probe into airport killing will be fair 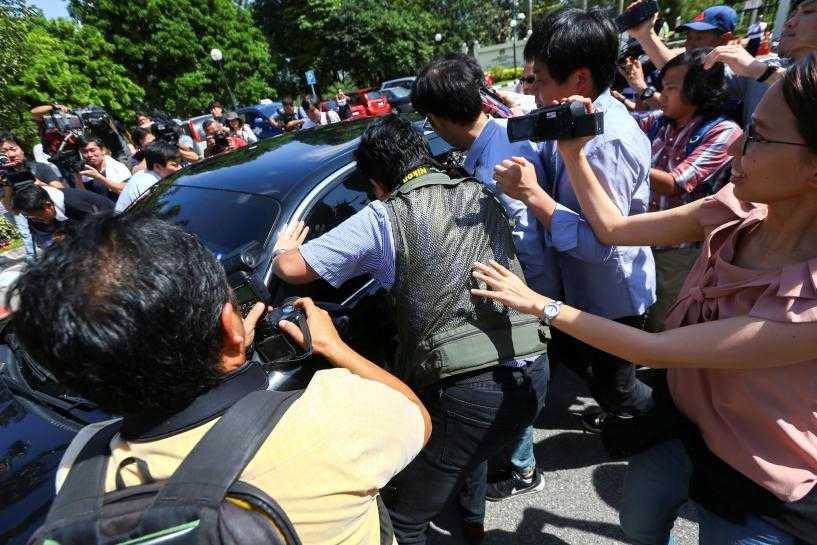 KUALA LUMPUR Malaysia’s Prime Minister Najib Razak said on Monday his government’s investigation of the killing of the North Korean leader’s half-brother, Kim Jong Nam, will be “objective”, as tensions rose between the countries.

Earlier on Monday, Malaysia said it had recalled its envoy from Pyongyang and summoned North Korea’s ambassador in Kuala Lumpur, who again cast doubt on the impartiality of Malaysia’s investigation into the murder and said the victim was not Kim Jong Nam.

“We have no reason why we want to do something to paint North Korea in a bad light, but we will be objective,” Najib told reporters in the Malaysian capital, Kuala Lumpur.

The son of Kim Jong Nam, 22-year-old Kim Han Sol, was expected to arrive in the Malaysian capital from Macau late on Monday, according to an airline source and a media report.

Malaysian authorities have said they will release the body of the victim, believed to have been killed by North Korean agents, to the next of kin.

CCTV footage, released by Japanese broadcaster Fuji TV, appeared to show Kim Jong Nam being attacked at Kuala Lumpur International Airport last Monday by a woman believed to have wiped a fast-acting poison on his face.

Reuters could not independently verify the authenticity of the video, and police officials were not immediately available for comment.

Kim Jong Nam, 46, who had been living in the Chinese territory of Macau under Beijing’s protection, had spoken out publicly against his family’s dynastic control of isolated, nuclear-armed North Korea.

South Korean legislators last week cited their spy agency as saying the young and unpredictable North Korean leader, Kim Jong Un, had issued a “standing order” for his half-brother’s assassination, and that there had been a failed attempt in 2012.

Malaysian police said they were hunting four North Koreans who fled from the country on the day of the attack, having already detained one North Korean man, a Vietnamese woman, an Indonesian woman, and a Malaysian man.

At least three of the wanted North Koreans caught an Emirates flight to Dubai from Jakarta late on the day of the attack, an immigration official in Indonesia told Reuters.

Malaysia’s Star newspaper reported that all four had returned to North Korea.

North Korea had sought to prevent Malaysia from conducting an autopsy, insisting the body be handed over. Its envoy in Kuala Lumpur criticized Malaysian authorities for “delaying” the release of the body.

“At the moment we cannot trust the investigation by the Malaysian police,” ambassador Kang Chol told reporters after talks at the foreign ministry.

He said the embassy had only identified the victim as Kim Chol, based on the passport found on the dead man, and suggested a joint investigation with Malaysian authorities. Kim Jong Nam had been caught using fake travel documents in the past.

Malaysia’s foreign ministry said it had recalled its ambassador to North Korea “for consultations”, and said investigations were being carried out in compliance with the law.

“Any suggestion to the contrary is deeply insulting to Malaysia, as is the suggestion that Malaysia is in collusion with any foreign government,” Foreign Minister Anifah Aman said in a statement.

Malaysia is one of the few countries that maintains ties with reclusive North Korea, and the dispute could further isolate the impoverished state.

South Korea, acutely sensitive to events in its volatile neighbor, convened a meeting of its National Security Council.

Prime Minister Hwang Kyo-ahn told the meeting that it was nearly certain that North Korea was behind the killing.

“The murder carried out in public at an international airport of a third country is an unforgivable and inhumane criminal act and clearly demonstrates the recklessness and brutality of the North Korean regime that will spare no avenues when it comes to perpetuating itself,” Hwang said.

“The North Korean regime’s terrorism tactics are getting bolder so we must be more vigilant.”

South Korean and U.S. officials had earlier said the killing was probably carried out by North Korean agents.

Grainy CCTV images showed Kim, wearing a light-colored jacket and trousers and with a backpack on one shoulder, heading for an automatic check-in counter in the airport departure hall.

A woman approached Kim from behind on the left and another – identified by Fuji as the Vietnamese woman, wearing a white shirt – walks rapidly up behind him from his right, before what appears to be a scuffle takes place.

In footage taken from another angle, the woman in the white shirt appears to lunge from behind and throw something over his head, locking her arms around him briefly.

As the woman in white quickly walks away, the second woman also moves off rapidly in another direction.

Later footage shows the portly, balding middle-aged man stumbling, wiping his face, and seeking help from people while gesturing to his eyes before being escorted to a clinic.

The mother of the detained Indonesian woman told Reuters that her daughter, Siti Aishah, had been duped into believing she was part of a television show or advertisement.

According to Malaysian media, the Vietnamese suspect, Doan Thi Huong, told police she had been tricked into taking part in what she thought was a practical joke.

There is speculation that China’s patience with North Korea could be tested by the killing, because Kim Jong Nam had been living in Macau, where he was headed when he was attacked.

China said on Saturday it had suspended all coal imports from the North, a vital source of revenue.

China is seen to be irritated by the North’s repeated aggression, including two nuclear tests since early 2016 and a Feb. 12 intermediate-range ballistic missile launch, the latest in a series of missile tests.