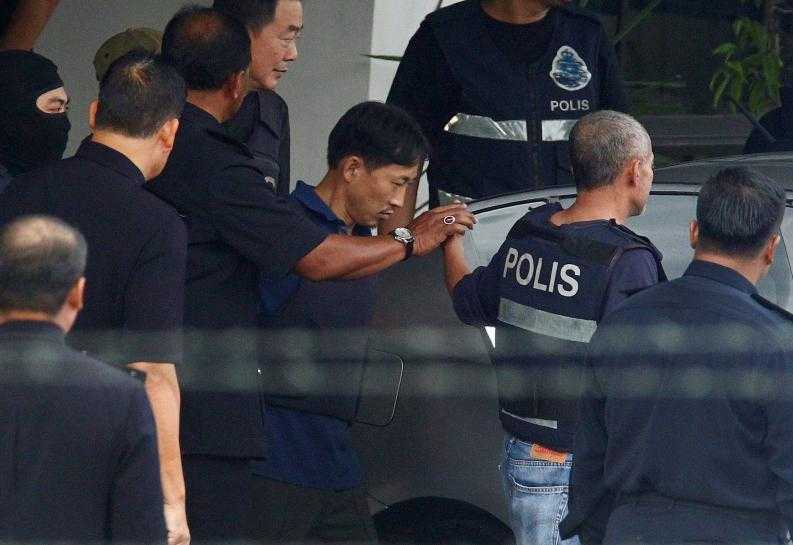 KUALA LUMPUR Malaysia released on Friday a North Korean suspect in the murder of the estranged half-brother of North Korea’s leader and prepared to deport him, while police issued an arrest warrant for another North Korean wanted in connection with the killing.

Kim Jong Nam was murdered on Feb. 13 at Kuala Lumpur International Airport, after being assaulted by two women who Malaysian police believe smeared his face with VX, a chemical classified by the United Nations as a weapon of mass destruction.

The women, one from Indonesia and the other from Vietnam, were later detained and were charged this week with murder.

A North Korean man, Ri Jong Chol, was also arrested days after the murder, but he was released from police detention on Friday. He was taken from detention to an immigration office wearing a bullet proof vest to be processed before being sent back to Pyongyang.

“He, accompanied by two representatives of the North Korean embassy, are scheduled to depart to their native country today,” Mustafar Ali, director general of the Immigration Department said in a statement.

Malaysia’s attorney-general told Reuters on Thursday he was being released due to insufficient evidence.

The murder of Kim Jong Nam, 47, has soured relations between Malaysia and North Korea, which had maintained friendly ties for decades.

Kim, who had been living in the Chinese territory of Macau under Beijing’s protection, had spoken out publicly against his family’s dynastic control of isolated, nuclear-armed North Korea.

South Korean legislators cited their spy agency as saying the young and unpredictable North Korean leader, Kim Jong Un, had issued a “standing order” for his half-brother’s assassination, and that there had been a failed attempt in 2012.

Police have identified seven other North Koreans wanted in connection with the killing, including a senior embassy official and a member of staff at the North Korean airline Air Koryo. Four of them are known to have left Malaysia.

An arrest warrant was issued on Friday for the 37-year old airline worker, Kim Uk Il. Malaysia has stepped up checks at all border crossings for North Koreans linked to the case, police have said.

Reuters reported this week that a front company run by North Korean intelligence agents ran an arms operation out of Malaysia.

“Definitely we are going to investigate any such incidences,” Zahid said when asked about the arms operation.

North Korea has not commented on its suspected involvement in the arms operation.

It has also not confirmed the death of Kim Jong Nam.

It has acknowledged the death of a North Korean but its ambassador said earlier that Malaysian police investigations could not be trusted.

North Korea said that its citizen may have died of a heart attack.

Kim Jong Nam was in the airport departure hall when he was assaulted by the women, who wiped his face with a liquid, identified in an autopsy as VX. He died within 20 minutes.

The women have told diplomats from their home countries that they thought they were participating in a prank for reality television.

Malaysia condemned the use of VX and has said it is in close contact with the Organization for the Prohibition of Chemical Weapons, an inter-governmental organization based in the Netherlands, regarding the incident.