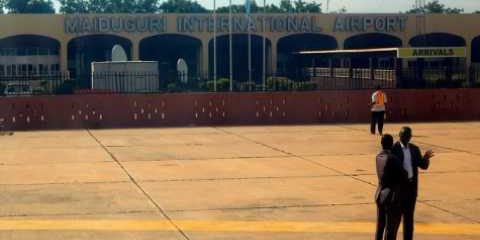 has taken over the airport following a raid on nearby military units by Boko Haram.

Residents of Maiduguri said the Islamist militant sect attacked the Nigerian Air Force base in the early hours of today in attempt to overrun the entire city of Maiduguri. About 300 militants were reported to have arrived in pickup trucks with heavy weaponry

Several explosives were hauled at the base but Air Force personnel reportedly repelled the militants, killing several of them.

There is no word on casualties on the side of the military. Mobile telephone lines have been shut down since President Goodluck Jonathan imposed a state of emergency on three states, including Borno, in May.

A spokesperson for the ministry of Aviation, Yakubu Datti confirmed the closure of the airport to SaharaReporters, but he denied the airport was affected in the attack.

Similarly, SaharaReporters can exclusively reports that negligence on security measures advised following Boko Haram renewed insurgency is one of the reasons that largely made today’s attack possible by the sect.

The Nigerian military despite its denial are fighting the Boko Haram sect with obsolete weapons that are less inferior to that of the sect’s sophistication, and also poorly remuneration for the troops on the war front.

A military source confirmed that for over month, both the Federal Government and the higher military command have been advised on the need to station detachment of counter-terrorist troops around Sahara Desert with sole aim of crushing Boko Haram Islamic sect in view of the sect penetration in Nigeria through several borders with Niger Republic, Cameroon and Chad.

Yobe state, which is second stronghold of the sect, also had international borders with Zinder and Diffa regions of Niger Republic.

The formation of a military base, according to the source remained most viable option in containing the increasingly strength of the sect, who are getting training, support and other logistic support in the un-policed deserts that stretch from Algeria and Mauritania up to Niger and Chad.

The source who spoke on condition of anonymity, said, “It has become imperative for us to submit our candid position as military with sole responsibility of preserving Nigeria’s sovereignty. The terrorists find their way into Borno and Yobe via our porous borders. And their main planning and training is in the desert, afterwards they sneak into their camps inside Nigeria and so instead of waiting, we are proposing that we have full military base in the desert that would comprise both land and air operations.

“This is our submission to the government; it is dangerous waiting for them. They are becoming more sophisticated and organize by the day, and so we must move forward. Their trainees and those providing them with logistics are right inside the desert between Niger Republic and Chad.”, the source said.