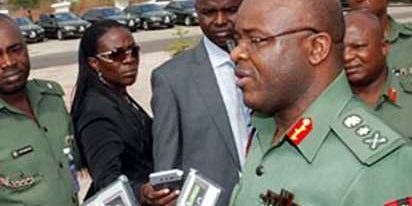 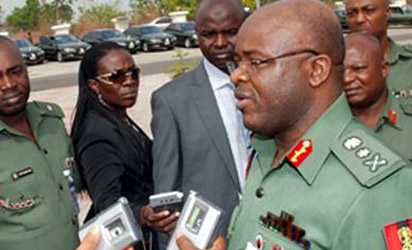 Immediate past Chief of Army Staff, COAS, Lt-Gen. Azubuike Ihejirika, (rtd), has sensationally declared that he fought Boko Haram sect, dismissing allegation that he is a sponsor as frivolous and a distraction to the nation.

Ihejirika, who was speaking at a general meeting of his Nigerian Defence Academy, NDA, Course 18 alumni yesterday, in Abuja, said that President Goodluck Jonathan approved all that he did as the COAS.

An Australian negotiator, Dr. Stephen Davis, had alleged that former Governor of Borno State, Ali Modu-Sheriff and Ihejirika were sponsors of Boko Haram.

However, the three star General said that he would not be drawn into overheating the system by politicians, warning that Nigeria must first exist peacefully for anyone to hold power or do business.

Expressing the optimism that Nigeria will overcome all these challenges and emerge even much more stronger, Ihejirika assured that “we will get to the root of this problem.”

He said further: “I want to further advice that baseless frivolous, and unfounded allegations like this have the capacity of diverting our attention away from the main problem.

“When this issue came out I was wondering, but today I find myself having to give myself the same advice I have given Nigerians time and time and over again.

“The advice I have given myself is that I will not and will never, no matter the situation and pressure contribute in any form to overheating the system.

“When you join the military it is for sacrifice, our mates died in the Charlie 130 air crash along with others. “Nigeria as a nation too has had more than its fair share of difficulties, the kind of issues that come up from time to time, threaten the very fabric of our existence, and we wonder whether the nation was going to go down. Yet we overcome it. “The current Boko Haram menace is one such problem that we will overcome and hopefully come up even much stronger.

“A lot of people have spoken on an issue that wouldn’t have been subject of discourse, if we had better knowledge of the strategy and tactics of terrorist the world over.” “If our politics have been mature enough, but like Alhaji Tafida said, we will get there, and like the general from APC said we will get there.

“I am happy that if this forum has been able to get PDP and APC together it’s a major achievement, so I can say that gradually we will get to the root of our problem.

“When in 2011 at the army annual conference, I said that the nation was at war, it was not easily appreciated, my colleagues tried to say no no! no! It’s not war, it’s just minor internal security problem.”

Meanwhile, in the light of the current challenges in the counter-terrorism efforts in the North East which has understandably elicited a sense of apprehension among citizens and even foreign allies, the DHQ has reiterate the pledge and commitment it made while briefing the Joint Committee on Defence of the National Assembly to the effect that everything will be done to reverse the situation and defeat the rampaging terrorists.

This was contained in a press statement from the Director Defence Information, Major General Chris Olukolade. The statement reads: “While welcoming all the concerns shown by Nigerians and a section of the international community following the increased menace and activities of terrorists, it is necessary to reassure all that the Nigerian Armed Forces is more than ever determined and committed to the defence of the sovereignty and territorial integrity of Nigeria, regardless of any odd.

“It is not only the pride and reputation of the military that is at stake but that of the entire nation. We therefore urge our citizens not to lose hope or be disenchanted but to remain steadfast and supportive of the military as all steps are being taken to ensure the success of the counter-insurgency operations, especially at this crucial time when our sovereignty is being challenged.

“With this in mind, it is important to reiterate that the Nigerian military is fully conscious of its obligations to the Nigerian state and remains willing and ready to perform its duties with utmost diligence.

Therefore, what the military requires at this critical period in the nation’s history is not pillories but continued support from all stakeholders and comity of nations.

“Indeed, this is not the time to despair or shift blames. Rather it calls for concerted effort by all and sundry to stop the agents of darkness who seek to destroy our country and civilization. On its part, the Nigerian military as a fighting force, assures Nigerians once again that this battle will be won.”

In a similar vein, the governor of Borno State, Kashim Shettima has assured that Nigeria will overcome the current insurgency. Apparently mourning the loss of lives and property in the hands of Boko Haram, he described the development as quite sad.

His statement which was broadcast in the state reads in part: “In recent days and weeks, we have come under renewed and augmented attacks, waged against all of us, by an armed minority that seeks to impose on us, a doctrine that is completely at variance with the religion of Islam which they claim to promote; a doctrine that negates the dignity and existence of humanity on earth, despite Allah’s decree in the glorious Quran, that He has dignified the human creature, prohibited unjust killings and made the religion of Islam that which does not sanction compulsion in a multi-faith society like ours.”

He said vowed that his government would continue to give adequate support to the federal government in its war against insurgency.