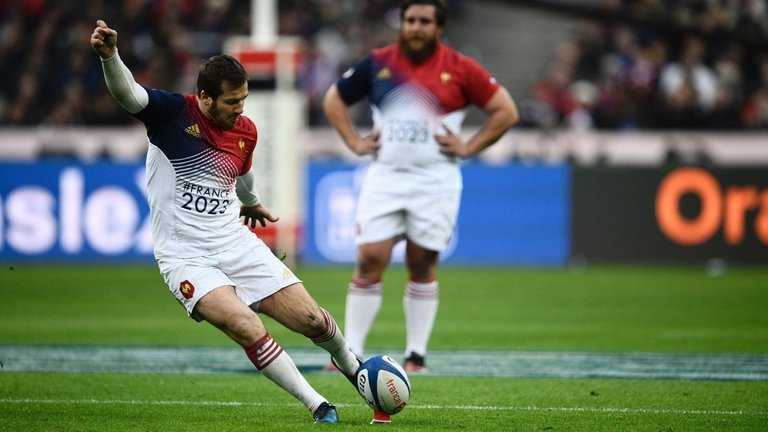 A Stuart Hogg try had given Scotland a 17th-minute lead but, after a sustained period of pressure, France replied through Gael Fikou on the half-hour mark.

Lopez kicked two penalties and a conversion to put France in control at 13-5 but Finn Russell knocked over a pair of three-pointers to keep the Scots in touch at the break.

Scotland went over four minutes into the second half through replacement Tim Swinson before Russell made a mess of the easy conversion.

However, their lead was short lived, Lopez adding a further three off the tee to level things up almost immediately.

France dominated as the half continued going close through Remi Lamerat, who was denied by the television match official for losing control over the line.

Their pressure eventually told and after turning down a series of kickable penalty attempts in the build-up, France turned to the boot of Lopez in both the 72nd and 77th minutes to kick Les Bleus to victory.

Despite Scotland losing by more than two points it was Finn Russell’s conversion miss after Tim Swinson’s 44th minute try that proved to be the turning point in the match.

After a period of celebrating under the posts the ball and with the 90-second time limit rapidly running out the ball was placed quickly onto the tee, toppling off in the run up and leaving Russell to optimistically swipe it under the bar.

It deprived Scotland of a five-point lead and handed momentum to the French allowing them to play for the penalty and not the try.

Moment of the match

The moment of the match came when Swinson went over under the posts after fine build up work from winger Tommy Seymour, showcasing how far Scotland’s attacking game has come in recent times.

France’s revival after a dismal performance in the 2016 Six Nations continued. For a side not famed for cool heads under pressure, France continued to battle against a never-say-die Scottish side and it paid off with the victory.

Despite the close nature of the game, neither side reverted back to possession rugby and tried to keep the ball alive at every opportunity, leading to an entertaining encounter from start to end.

While Scotland may not have backed up their opening weekend victory over Ireland in the way many would have liked, this game showed once again that this years’ tournament could be one of the most competitive to date.

The fragility of the Scottish scrum was evident for all to see throughout the eighty minutes.

France used their dominance in the area to constantly punish their opponents, it gave France six penalties and a free-kick whilst also robbing their opponents of territory at every turn.

Man of the match

Stat of the game Scotland have now not beaten France in Paris in nine attempts, since the final Five Nations Championship in 1999, when they won the tournament.

Scotland full-back Stuart Hogg:“It’s tough going out there, France are a massive physical pack and they brought it to us. But we chucked it away.

“Our errors cost us throughout the whole game. We didn’t look after the ball, didn’t respect it, and ultimately that’s cost us.”