London’s housing crisis is forcing employees to quit their jobs and making it difficult for firms to recruit staff, according to a new survey by the Confederation of British Industry (CBI).

The business organisation said 28 per cent of the 176 leading firms in the capital who responded said that some of their employees had left because they could not afford to live in the local area.

High housing costs in the capital are also apparently hampering the ability of firms to recruit entry-level staff, with 66 per cent of respondents citing them as having a negative impact. That was up from 57 per cent in 2015.

The survey suggests the housing situation is hampering the expansion of flexible working for employees too, with 36 per cent of firms claiming the long commutes of many staff make this more more difficult to offer.

This was despite the fact that 44 per cent of the firms surveyed say they offer premium salaries to London workers to retain them.

He added that the organisation backs the goal of London’s mayor, Sadiq Khan, to ratchet up the capital’s new house building rate to 65,000 a year, partly by relaxing planning constraints. However, the CBI said more “clarity” on the delivery plan was still required.

Two-thirds of firms said they expected London housing to become more unaffordable for the working population over the next three years, despite the building commitments.

And 53 per cent of firms said the mayor should consider encroaching on the capital’s historic “green belt” to deliver more housing.

The average house price in London was £472,000 in February versus £225,000 for the UK, according to the Office for National Statistics. That’s more than 14 times average earnings in the capital. 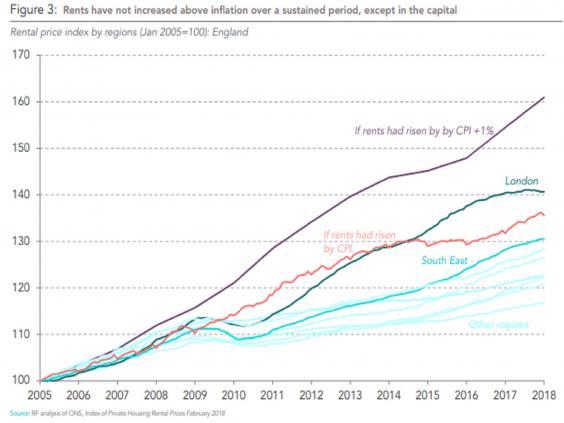 The Institute for Fiscal studies estimates that more than 30 per cent of London renters pay at least 50 per cent of their income on rent, versus less than 15 per cent for the rest of the UK excluding the capital.