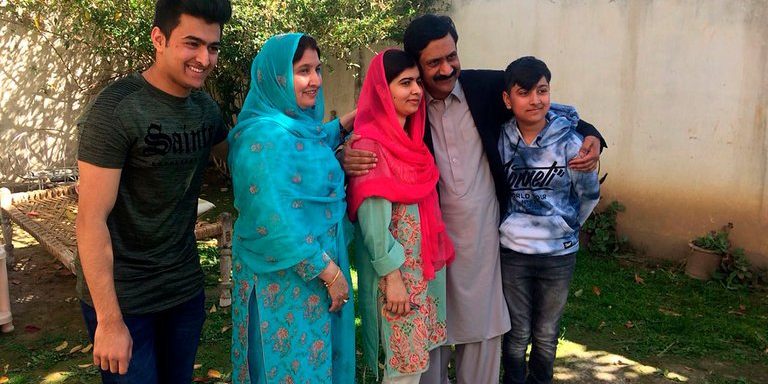 ISLAMABAD, Pakistan — Malala Yousafzai, the Pakistani activist for girls’ education and the world’s youngest Nobel laureate, visited her hometown in Pakistan on Saturday for the first time since the Taliban attempted to assassinate her in 2012.

Her return under heavy security to the city of Mingora in the Swat Valley — a former Taliban stronghold — was a deeply emotional moment for Ms. Yousafzai and her family.

“I wish to be in Swat, to be among you and serve you,” Ms. Yousafzai said with tears in her eyes as she met with former schoolmates and relatives at her old family house. “It is still like a dream for me to be among you,” she said, her voice quavering.

Ms. Yousafzai’s visit reflected how Pakistan has changed and how it hasn’t since the attempt on her life more than five years ago. The Taliban is now all but banished from Swat. But many Pakistanis are still deeply suspicious of Ms. Yousafzai’s mission to educate girls and empower women.

In October 2012, a Taliban militant boarded the school bus Ms. Yousafzai was riding home, asking “ Who is Malala?” before shooting her. Critically wounded, she first received medical treatment in Pakistan, and later in Britain where doctors spent months rebuilding her skull. After her recovery, she and her family stayed in Britain, where she is studying at the University of Oxford and continuing her advocacy work.

On Saturday morning, Ms. Yousafzai flew in a government helicopter from the capital, Islamabad, to the Swat Valley accompanied by her parents, two brothers and Marriyum Aurangzeb, the Pakistani state minister for information. They briefly visited the rental house in Mingora where the family once lived and were warmly welcomed by the new residents. Ms. Yousafzai was in tears when she entered the house.

“So much joy seeing my family home, visiting friends and putting my feet on this soil again,” she said in a Twitter post along with a photo of her family standing in the small garden of their old home. She also posted pictures of the scenic Swat Valley taken from the helicopter as it approached Mingora.

Urooj, a former schoolmate and neighbor who would only give her first name, said meeting Ms. Yousafzai left her friends with mixed emotions.

“It was a moment of joy and sadness both,” she said, “because she came for a visit but was leaving as well.”

Ms. Yousafzai also visited a local hotel and a college near Mingora.

“My first visit to Swat Valley after five and a half years since the attack,” she wrote in the visitors’ book at the school, where she also made a brief speech. “I have felt so happy. I am proud of my land and culture.”

Swat was once a stronghold of the Pakistani Taliban, who ruled by terror, public hangings and suicide attacks on security forces. The militants and their leader, Mullah Fazlullah, were driven out of the region after a fierce military campaign in 2009, and the valley has since returned to a more normal life.

But the security situation is still far from ideal, local residents say. The military maintains a large presence in the region and local residents have been protesting in recent months against the cumbersome security checks and barriers. The secrecy surrounding the visit was a testament to the lingering dangers in Swat. There was a heavy security presence in Mingora as the Yousafzais met with friends and family members, and a military helicopter hovered overhead.

But for the residents and Ms. Yousafzai, the fact that the Taliban are no longer visible and schools remain open were enough assurance that peace had returned to the region.

During her visit, Ms. Yousafzai praised the Pakistani Army for forcing the Taliban out of Swat and giving her initial medical treatment.

Although she has gained worldwide acclaim and recognition, Ms. Yousafzai is still viewed by many in Pakistan’s conservative society in a critical light, and some portray her as a Western stooge. On Friday in the eastern Pakistani city of Lahore and in several other cities, an association of private schools observed “I Am Not Malala Day,” with schoolchildren and teachers holding placards opposing her.

Ms. Yousafzai brushed off the criticism and said she could not understand why people had turned against her when she merely wanted girls to get an education, have careers and enjoy a better life. She says she plans to return to live in Pakistan after completing her education in Britain and will continue to advocate for girls’ education and women’s empowerment.

Ms. Yousafzai plans to return to the Britain on Monday.