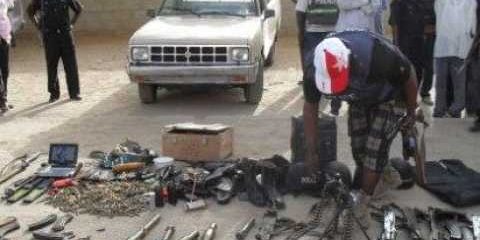 An Abuja Federal High Court has refused bail for three Lebanese- Nigerian men accused of stockpiling weapons and plotting terrorist attacks for Hezbollah. Judge Adeniyi Ademola Adetokunbo said Mustapha Fawaz, Abdullah Tahini and Talal Roda would remain locked up in the interest of national security and promised to begin their trial soon to protect their rights.

The men have been locked up for nearly two months and recently filed a $19 million unlawful detention suit against the government. After the ruling, the detainees appeared stoic as they conferred with family members who looked disappointed.

All three are long-time residents of Nigeria. Fawaz is the coowner of Amigos Supermarket and Wonderland Park in Abuja which Judge Adetokunbo ordered to remain sealed for investigation.

The prosecutor, Simon Egede, opposed the suspects’ bail on the grounds that the suspects, who were arrested in May on charges of directly supporting Hezbollah, a Lebanese political party that has a powerful militia, posed a flight risk. “We believe that the cases are very serious in nature,” he said. “We have fears that they can escape, that they can run away because of their dual citizenships.”

The prosecution said Tahini was arrested at an airport in May carrying $61,000 in undeclared cash, funds allegedly designated to support Hezbollah, and that he is the group’s coordinator in Nigeria.

The only evidence made public so far is a stash of weapons, which included 21 rocket-propelled grenades, nine pistols and 17 Ak-47 rifles, discovered under a house in Kano.

While Raji did not dispute the prosecution’s claim that the weapons posed a serious threat, he claimed that they do not belong to his clients. “They’re not the owners of the arms and the premises on which they were found belongs to another person entirely,” he insisted.

Prosecutors have submitted an affidavit that says they have witnesses and further evidence to support their charges. The trial is set to begin on July 29.