Le Pen kicks off campaign with promise of French ‘freedom’ 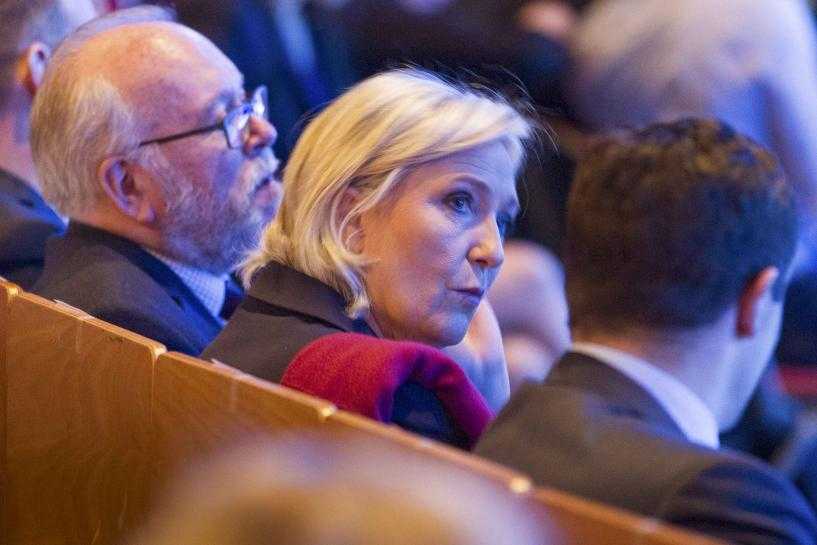 LYON, France French far-right leader Marine Le Pen kicked off her presidential campaign on Saturday with a promise to shield voters from globalization and make their country “free”, hoping to profit from political turmoil to score a Donald Trump-style upset.

Opinion polls see the 48-year old daughter of National Front (FN) founder Jean-Marie Le Pen topping the first round on April 23 but then losing the May 7 run-off to a mainstream candidate.

But in the most unpredictable election race France has known in decades, the FN hopes the scandal hitting conservative candidate Francois Fillon and the rise of populism across the West will help convince voters to back Le Pen.

“We were told Donald Trump would never win in the United States against the media, against the establishment, but he won… We were told Marine Le Pen would not win the presidential election, but on May 7 she will win!” Jean-Lin Lacapelle, a top FN official, told several hundred party officials and members.

In 144 “commitments” published at the start of a two-day rally in Lyon, Le Pen proposes leaving the euro zone, holding a referendum on EU membership, slapping taxes on imports and on the job contracts of foreigners, lowering the retirement age and increasing several welfare benefits while lowering income tax.

“The aim of this program is first of all to give France its freedom back and give the people a voice,” Le Pen said in the introduction to the manifesto.

Emmanuel Macron, a pro-European centrist candidate who polls say is likely to face Le Pen in the presidential election run-off, will also hold a rally in Lyon on Saturday to propose a radically different platform.

Opinion polls suggest Macron would easily beat Le Pen in the second round, but faith in pollsters has been shaken after they failed to predict Trump’s election win or Britain’s vote last June to leave the European Union.

Former frontrunner Fillon has been damaged by allegations, which he denies, that he paid his wife hundreds of thousands of euros of public money for work she may not actually have done. A poll on Saturday showed the conservative slipping to third place in round one.

The FN officials taking to the stage targeted Macron more than any other of Le Pen’s opponents, presenting the former investment banker as the candidate of “international capitalism.” The crowd booed his name every time.

“This presidential election puts two opposite proposals,” Le Pen said in her manifesto. “The ‘globalist’ choice backed by all my opponents … and the ‘patriotic’ choice which I personify.”

If elected, Le Pen says she would immediately seek an overhaul of the European Union that would reduce it to a very loose cooperative of nations with no single currency and no border-free area. If, as is likely, France’s EU partners refuse to agree to this, she would call a referendum to leave the bloc.

The electoral manifesto is short on macro-economic details but the FN published its growth and public finances targets on Saturday.

It says a generous policy of tax cuts and welfare increases would be made possible by fighting social security fraud, tax evasion and changing tack on the EU and migration, but without explaining how that would be done.

The program is far less detailed than her 2012 platform and has softened the presentation of a number of controversial issues, with the FN trying to find the right balance between reassuring voters and keeping its anti-establishment image.

For instance, instead of devoting a whole chapter to “the orderly demolition of the euro” as the 2012 manifesto did, the 2017 one only briefly mentions regaining France’s “monetary sovereignty.”

Opinion polls showing a majority of voters, especially the elderly, want to stay in the euro.

Immigration remains the party’s signature theme. When Franck de Lapersonne, an actor and FN supporter, told the rally that 19th century writer Victor Hugo “did not learn Arabic at school and that makes me happy,” he received the loudest ovation of the day, with the crowd chanting the party’s trademark slogan “On est chez nous” (“This is our country!”)

Le Pen and her party are facing their own scandals, including one over assistants in the European Parliament and investigations over her 2012 campaign financing.

But that leaves grass-roots supporters undeterred. “We’re fighting to win the 2017 election,” said Victor Birra, the regional head of the FN youth association.