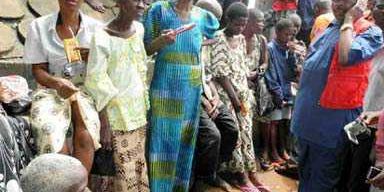 The Federal High Court sitting in Lagos is expected to commence hearing in a fundamental human rights suit filed against the Lagos State government by an Onitshabased lawyer, Anthony Orunkoya, and the National Conscience Party (NCP) over the deportation of 69 Anambra State indigenes.

The plaintiffs, Orunkoya and the Anambra State branch of NCP are praying for a declaration that the arrest, confinement and/or detention and subsequent deportation and/or dumping at Onitsha, of the 69 persons of Anambra State origin or any Nigerian whatsoever by the Government of Lagos State on the grounds that such persons are destitute in need of rehabilitation and re-union with members of their families or any reason whatsoever not provided for in the constitution is an infringement, a breach and gross violation of their constitutionally guaranteed fundamental rights.

They are also seeking an order of court restraining the Government of Lagos State either by itself or through any of its agencies, servants or privies, from

arresting, confining, detaining and/or deporting any Nigerian not of Lagos State origin to any state in Nigeria whatsoever on any ground whatsoever not provided for in the 1999 Constitution.

The plaintiffs are also asking the court to declare that the liberty of the deportees were infringed upon by the Lagos State Government to wit: right to dignity of human person Section 34(1)(a), right to personal liberty Section 35(1), right to freedom of movement Section 41(1), and freedom from discrimination Section 42(1)(a) of the 1999 Constitution of Nigeria (as amended in 2011) as well as the African Charter on Human and Peoples Rights and the Universal Declaration of Human Rights.

In a statement in support of the motion on notice, the state chairman of NCP, Sir Peter Okala, said that NCP, which has the history of protecting Nigerians, would not watch helplessly for a constitutional government like Lagos State to go against the law that established it with impunity, adding that that is why the party aligned with Orunkoya, the first plaintiff to bring up the action against Lagos State Government.