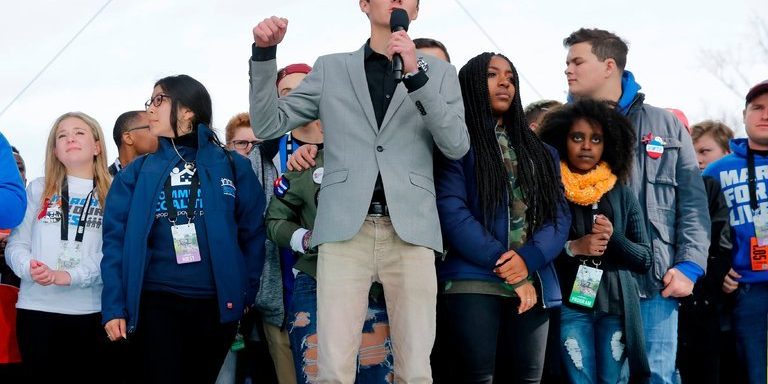 Laura Ingraham, a Fox News host, apologized under pressure on Thursday for taunting a survivor of the school shooting in Parkland, Fla., as three companies confirmed they would pull advertising from her show.

The dispute began Wednesday when Ms. Ingraham shared an article about the student, David Hogg, 17, getting rejected from some of the colleges to which he had applied and accused him of whining about it.

In response, Mr. Hogg, who has rapidly become a prominent advocate for gun-control policies, called on Ms. Ingraham’s advertisers to boycott her show. Three of the companies, TripAdvisor, Wayfair and Nutrish, said Thursday they would pull their ads.

As news of the boycotts began coming out on Thursday, Ms. Ingraham apologized.

Mr. Hogg said he was unimpressed by her remarks.

“She only apologized after we went after her advertisers,” he said. “It kind of speaks for itself.”

Mr. Hogg said he has grown accustomed to being criticized, often ruthlessly. But to hear a prominent television host mock his college rejections was “extremely frustrating,” he said.

Ms. Ingraham’s remarks went too far for TripAdvisor, which said it planned to stop advertising on the show and that it did not “condone the inappropriate comments made by this broadcaster.”

“We also believe Americans can disagree while still being agreeable, and that the free exchange of ideas within a community, in a peaceful manner, is the cornerstone of our democracy,” the company said through a spokesman. “In our view, these statements focused on a high school student cross the line of decency.”

Nutrish, a pet food brand owned by Rachael Ray, said it was “in the process of removing our ads from Laura Ingraham’s program.”

“The comments she has made are not consistent with how we feel people should be treated,” the company said.

Wayfair, an e-commerce company, said in a statement that it supports “open dialogue and debate on issues,” but that it would stop advertising on Ms. Ingraham’s show.

“The decision of an adult to personally criticize a high school student who has lost his classmates in an unspeakable tragedy is not consistent with our values,” the company said.

Consumers have increasingly used social media to demand that advertisers respond to a series of controversies, particularly those involving Fox News hosts. Last year, more than 50 brands pulled ads from “The O’Reilly Factor” after The New York Times reported on settlements that the show’s host, Bill O’Reilly, had made with women who accused him of sexual harassment or other inappropriate behavior, which contributed to his ouster.

Similar boycott calls around the host Sean Hannity did not gain as much traction. In November, several brands that initially said they would stop advertising on Mr. Hannity’s show after comments he made about Roy S. Moore, the former Republican candidate for Senate in Alabama, later walked back those statements. Keurig ignited a firestorm when it said that it planned to halt ads on the show, as Mr. Hannity’s fans posted videos of themselves destroying its machines. The company’s chief executive later apologized to employees for any negativity they had faced from the “appearance of ‘taking sides.’”

Mr. Hogg said he was glad that some companies had pulled their ads from Ms. Ingraham’s program, but called it “just the beginning.”

If all of her advertisers pulled out, he said, “we can show that if you continue to bully the students that survived a mass murder, there’s going to be consequences.”

“Deal with the issues, not the individuals,” he said.

He said he had been accepted by Cal Poly, San Luis Obispo; California State University San Marcos; and Florida Atlantic University, but has not decided which school he’ll attend.