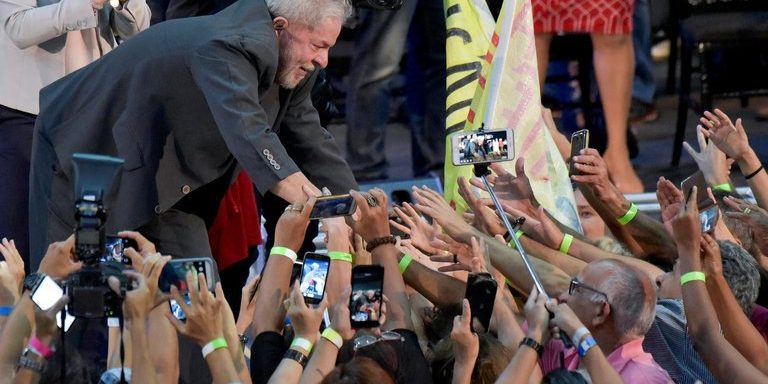 RIO DE JANEIRO — A new Netflix series about a sprawling corruption investigation has muscled its way into Brazil’s heated politics, outraging supporters of a leftist former president who is trying to make a comeback and stirring debate about how closely a docudrama should adhere to the facts.

The series, “The Mechanism,” has drawn heat since it was released on March 23. Critics say its inaccuracies are unfair to a former president, Luiz Inácio Lula da Silva, who is a leading candidate in the polls for the election this fall. Others see in the show a more or less fair, if depressing, depiction of an intricate investigation that has so far seen more than 100 people convicted, including senior political figures like Mr. da Silva.

Still others say the publicity — however negative — has only been a boon for Netflix, and lament the frivolity of talking about a television show instead of poverty, violence, environmental conflicts and the myriad other challenges that face Brazil, Latin America’s most populous nation.

The debate has been fierce.

Paulo Roberto Pires, a left-leaning columnist at the newsmagazine Época, called the series misleading, adding that it reduced complex political, historical and social issues to the fight against corruption.

Antonia Pellegrino, a feminist activist who has a blog at the newspaper Folha de São Paulo, said the series amounted to a “condemnation of representative democracy.”

Mr. da Silva, known universally as Lula, has not directly commented on the series, but his ally and successor as president, Dilma Rousseff, wrote a post on Facebook listing inaccuracies. “Netflix’s board doesn’t know what they got into,” she said last Monday, a comment that some commentators interpreted as an implicit threat. “I think this is very serious for them.”

The show’s creator, José Padilha, a Brazilian based in Los Angeles, said the furor had only benefited the series. “I think Lula and Dilma are helping us a lot with the marketing of the series,” he said with a laugh.

Mr. Padilha, who also created the Netflix series “Narcos,” about a Colombia drug kingpin, noted the disclaimer before each episode, which says that the series is “loosely based on actual events.”

“The Mechanism” dramatizes a corruption investigation — known by its police code name, Operation Car Wash — that has now roiled Brazilian politics for more than four years. Three successive presidents have been implicated: Mr. da Silva, who was convicted of corruption and money laundering; Ms. Rousseff, who was impeached and removed from office over unrelated charges of violating budgetary rules but also faced criminal investigations; and the incumbent, Michel Temer, who has faced charges and remains under investigation.

A main source of the controversy is a scene in the fifth episode of the series, in which a character based on Mr. da Silva talks about efforts to block the investigation and speaks of a need to “stop this bleeding.”

In reality, the quotation was uttered in a notorious 2016 secret recording of Senator Romero Jucá, a onetime ally of Mr. da Silva’s who by then had become a political opponent and later backed the impeachment of Ms. Rousseff.

Ms. Rousseff pointed to other liberties the series took with the facts.

One money-laundering scandal referenced in the series occurred when an opposition party — not Mr. da Silva’s Workers’ Party — was in charge.

Ms. Rousseff also complained that the main money launderer, Alberto Youssef, is depicted in a scene inside her campaign committee during the 2014 elections, when in reality he was already in jail by then.

The series takes a largely dim view of Mr. da Silva. Prosecutors have portrayed him as an embodiment of corruption, while Mr. da Silva says that the investigations were driven by rivals who resented his redistributive economic policies.

Mr. da Silva wants to stand as a candidate in the October election, although he was convicted last year of corruption and still faces charges in six other corruption cases. He has appealed. On Wednesday, the Supreme Court is expected to rule on whether he can be jailed.

The title of the Netflix series comes from Mr. Padilha’s theory, expounded in columns, that only the corrupt can get ahead in Brazilian politics.

Some critics have called him a reactionary, a charge he denies; he has made donations to a smaller left-wing party that has not been embroiled in the corruption investigation.

On the left, the response to Mr. Padilha’s show has been outrage. Pablo Villaça, a left-leaning film critic, called the release of the series “extremely irresponsible.” After watching two episodes, he announced on his Twitter account that he was canceling his subscription to Netflix.

More conservative voters saw it differently. “I think Padilha wanted to give a general overview of corruption in Brazil,” said Adelaide Oliveira, a spokeswoman for Vem Pra Rua, or Take to the Streets, an activist movement that opposes corruption and big government. “I think he did it well, though reality is richer.”

In a speech during a rally last Wednesday, Mr. da Silva said he might sue Netflix. “If we need to, we will sue him in Brazil, in the United States, in Europe, anywhere,” he said. His lawyers told Netflix last year about his concerns with distortions in the series; the company did not respond to requests for comment about this article. Nearly half of Brazilians lack home internet access, limiting the reach of the series here.

In an interview, Mr. Padilha played down the significance of the misquote attributed to Mr. da Silva, saying the phrase “doesn’t belong to anybody.”

He added, “We have a show where we show that those politicians stole billions of dollars, and the problem they have is with a line?”

Fábio Vasconcellos, a political scientist at the State University of Rio de Janeiro, said he did not think “The Mechanism” would have much electoral impact. “The series fuels already existent points of view,” he said. “A lot of what is in there is very well known to Brazilians.”

But the series has found some fans among Brazilians. “People are criticizing it, but those people were the leaders of the government, of course they were involved,” said Gabriel Coelho, a 29-year-old cook in Rio de Janeiro. “We only need to find out to what extent.”

Others refused to give it an audience. “It’s bad for Brazil, because it’s a series that arrives in people’s homes with just with one side of the story,” said Paula Abreu, a 31-year-old teacher, also from Rio de Janeiro. “It’s concerning because it intensifies hate.”

It is likely that this will not be the last time Netflix wades into politically treacherous waters in Latin America.

In neighboring Argentina, expectations are high for a mini-series that Netflix has reportedly begun producing about the mysterious death of a prosecutor, Alberto Nisman, who was investigating the 1994 bombing of a Jewish community center.

Mr. Nisman was found dead in his bathroom with a gunshot wound to the head in 2015, hours before he was scheduled to testify in Congress about an explosive accusation that the president at the time, Cristina Fernández de Kirchner, and several members of her administration conspired to cover up what the accusers claim said was Iran’s role in the attack.

The death, which a recent forensic report concluded was a murder, has divided Argentina and continues to be enveloped in mystery.