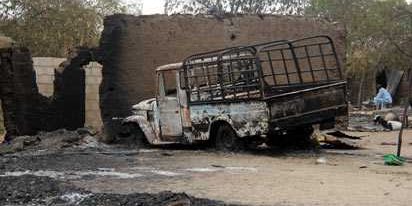 About five police officers were killed in an attack in Bama Town of Borno State.

Barely a week after a massacre in Baga community of Borno State, a gun battle similar to the Baga massacre occurred on Thursday in Bama Town of the state, claiming 17 lives including soldiers and police officers, security officials said.

The commanding military officer in charge of Bama Barracks, A.G Laka told the visiting Borno State Governor, Kashim Shettima, that trouble started in the commercial town of Bama when armed Boko Haram gunmen attacked a police patrol vehicle of a Divisional Police Officer killing two cops. Five police officers were also killed during the gun battle with the insurgents; while ten of the insurgents were also killed, the military officer said. The soldier said another ambush on soldiers in the town on the same day claimed the life of a soldier and injured four others.

In response, the Joint team of soldiers and police returned fire on the raging attackers which led to a colossal destruction of buildings mostly shopping malls and shops. Angry residents called on the federal government to withdraw the soldiers from the streets of the town; even as they vowed to lay down their lives should they suffer further attacks.

A PREMIUM TIMES reporter saw hundreds of houses and commercial buildings burnt. A local ward head, who declined mentioning his name for security reasons, said over 200 small time traders lost their wares in the fire.
Mr. Laka said that Boko Haram insurgents were using civilians, mostly women and children in the thatch houses as shield.

He said the special bullets fired by soldiers are called tracers, saying “once they hit target they catch fire.”
The Borno State Governor expressed sadness with the development and called for a general caution on the part of operatives and residents.

He ordered that seven trucks of food items be distributed to the displaced residents, while a committee is expected to advise government on compensation for victims who suffered losses.

Boko Haram is fighting for a separate Islamic Sharia country in their homeland in Northern Nigeria but is being resisted by the Nigerian government with the connivance of some.