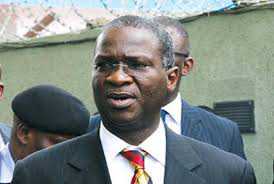 But in a swift reaction, Mr Agbaje faulted the claims made by the governor that his company defaulted in the payment of the land use charge.

Reacting to the allegation, Agbaje said the governor lied, saying “I have even been commended for paying my Land Use Charge on time.”

Fashola made the disclosure at the 8th Annual Lagos State taxation Stakeholders’ Conference held in Ikeja.

Fashola, who explained that Land Use Charge, LUC, was a consolidated tax combining ground rent and tenement rate, said: “Tax is prescribed by the 1999 constitution. It states that it shall be the duty of every citizen to declare its income to the appropriate and lawful agency; and pay the required tax promptly.”

Accusing Agbaje’s pharmacy of defaulting in the payment of land use charge to the coffers of the state, the governor said, “you will remember that in 2007, he (Jimi Agbaje) claimed that he was in Democratic People’s Alliance, DPA and later crossed to PDP. You know that he (Agbaje) manages a pharmacy called Jaykay Pharmacy, located at 9, Randle Close, Apapa Local Government. His pharmacy has not paid Land Use Charge for 2009, 2010, 2011 and 2012 respectively; it amounts to N1, 629, 064.62.”

Speaking further, he said; “let us do that mathematics to see how many facilities the fund would have provided in our hospitals and stationery in our schools. But this was the same person who was complaining that the state government spent three per cent of its budget on Primary education. Local Government is responsible for the management of the primary schools and yet he has withheld their taxes.”

The governor declared that the pharmacy paid LUC in 2013 and 2014 because the management and the candidate of the PDP realized that the election would be holding in 2015.

Fashola said: “I know that you have to vote next month but look at that candidate that would need to take over from me and be careful of who you vote for. This is the man who wants to be your next governor. I will advice you that you avoid deception and tax evaders.”

Explaining the importance of taxation, the governor said: “The payment of tax is the first principle of the social contracts between the government and the citizens. It is an irreducible legal minimum of citizenship and breach of this responsibility is a criminal offence under our law.”

In addition, he said: “All those who have paid their taxes have shown that they are lawful citizens. Anyone who has failed to pay tax is a bad citizen. He is also a cheat, such a person benefits from the commonwealth-the roads, hospitals and other facilities provided by funds generated from taxes paid by the residents.”

Meantime, the Chief Judge of the state, Justice Oluwafunmilayo Atilade has disclosed that 600 tax cases were prosecuted in year 2014.

Atilade said: “We dealt with 600 cases, but the important thing with these cases was that it showed increase in compliance.”

She noted that some of the cases were not completed because the defaulters complied, saying “the prosecution led to the recovery of hundreds of millions for the state government.”

Notable personalities present at the conference include the Oba of Lagos, Oba Rilwan Akiolu 1, former Minister of Industry, Dr. Onikepo Akande among others.