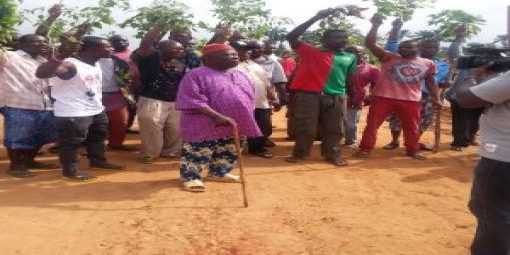 The battle for the ownership of controversial Aguaba Layout Cattle Market in Awka,

the Anambra State capital, has taken a new turn with the affected villages seeking court intervention to stop the Awka South Local Government from taking over the land.

Speaking on the issue, Chief Dilim Okafor, a former chairman of the land management committee and one of the leaders of Umuike village, the original land owner, told newsmen that his people have decided to take the local government to court over the matter.

He disclosed that the community had already hired the services of a Senior Advocate of Nigeria (SAN), who has since given Awka South LGA one month notice to hands off the land or prepare to meet the community in court.

Okafor questioned the power of the local government to take over the land, describing it as a move to deny Awka North its resource source.

Okafor said: “The abandoned cattle market was built by Umuike people in conjunction with cattle traders in 1994.

“The claim by the former Awka South Local Government Chairman, Chief Austin Ndigwe, that he built the market in 1997 is untrue.

“If he (Ndigwe) really built the market in 1997 as he claimed, why did he abandon it in 2000 when former governor Chinwoke Mbadinuju appointed him as Transition Chairman?”

Okafor added that if the market is to be relocated, the decision should be made by the state governor, Chief Willie Obiano.

On his part, the Chairman of Awka South LGA, Mr. Azubuike Iloh, insisted that nothing will stop his council from reactivating the market in line with the decision to re-plan Awka capital city.

He stressed that the Aguaba land was acquired by the government, saying that the place had not been released to any person or group of persons.