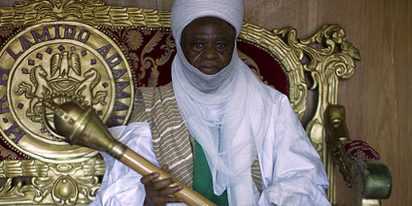 An elder statesman and a prominent traditional ruler, the Lamido of Adamawa, Alhaji Muhammadu Aliyu Mustapha, yesterday, declared that people from the Niger Delta region want to make it appear that Northerners are beggars or Almajiris.

Lamido also explained that his reason for advocating that oil producing states should control their oil wealth was because the oil states see the North as beggars.

Lamido who spoke in an interview with the Hausa service of the British Broadcasting Service (BBC), monitored

in Kaduna added that the oil producing states were threatening other parts of the country as if they cannot survive without oil money.

He maintained that the North has agriculture as a big business, arguing that all the advanced countries of the world, like Japan and Germany have no oil but they have made tremendous progressed and nothing should stop Nigeria from making progress without oil if the agricultural sector is properly harnessed.

Hear him: “These people who come from oil producing states are looking at us as if we are beggars, gold diggers who have nothing to do.

“That is why I said the non oil producing states are not cowards, they don’t fear anybody. Everybody is contributing his quota to make Nigeria great, but these people from oil producing states think that if what they want is not given to them, they would even prefer to stay out of Nigeria.

“That is why I said we too…even the expanse of land is a natural endowment. I said if that is the case, we have agreed they should go with their oil money, 100 per cent and the other parts of the country, all the non oil producing states in Nigeria not only the Northern states, there are non oil producing states in the South West and in the South East who are blessed with land should keep their land,” he said.

The monarch said some delegates at the conference were so arrogant and speak authoritatively as if they were more Nigerian than others, insisting that he will continue to speak his mind and the truth.