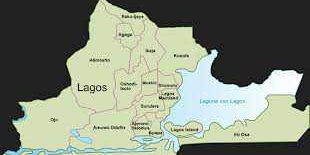 located between Ile Zik, Ikeja and Pen Cinema, Agege. The demolition was carried out after several warnings to the shanties’ occupants to remove their structures which are illegal.

Speaking on the demolition, the Taskforce chairman, Bayo Sulaiman, a Chief Superintendent of Police, CSP, said the area had been cleared of illegal shanties before and but the traders returned to erect structures on the setback between the road and railway.