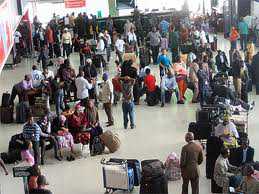 A new policy introduced by the Federal Airports Authority of Nigeria for passengers coming into the country to pay a special charge on their luggage has become a source of dilemma for travellers.

A lot of passengers, who came into the country on Monday, were stranded at the Murtala Muhammed International Airport, Lagos as they could not retrieve their luggage on time.

Some of the passengers, who spoke to our correspondent, alleged that their baggage had been deliberately delayed, adding that they were also maltreated by the security personnel at the arrival hall of the airport, claiming that they were acting on FAAN’s instruction.

For instance, a passenger who gave his name simply as Simon, and came into the country aboard an Emirate airline flight from Dubai, said he spent about five hours at the arrival hall before he could collect his luggage.

He said, “I was surprised to note that some of our luggage were being held by officials at the arrival hall, who refused to release them to us, stating that we had to pay N2,000 per luggage on arrival at the airport.

“The amazing thing is that we learnt that FAAN gave an order that the amount should be levied on cargoes that come through the terminal, but our pleas to the officials that some of our luggage could not be classified as cargoes fell on deaf ears.”

Another passenger, who chose to remain anonymous, said as of 4pm, a lot of passengers had yet to retrieve their luggage despite arriving some hours earlier.

He explained that the information they got was that the airport authorities had kept the luggage in their custody because the owners were meant to pay duties on them.

“As a result, you can see how rowdy and chaotic this whole place is; the fact is that we have been travelling for many hours, only for us to touch down and see this kind of thing; it is really a sad experience,” he said.

However, the General Manager, Corporate Communications, FAAN, Mr. Yakubu Dati, denied claims that the agency was charging passengers N2,000 on each luggage.

Dati said in a statement, “The charge does not apply to all passengers but to cargo agents who use passenger planes to transport their cargoes, often times 20 to 30 pieces of luggage unaccompanied or accompanied by proxies.

“This fraudulent practice mounts untold pressure on our conveyor belts and short-changes FAAN of its much needed revenue. Cargo agents are well aware that all cargoes must go through the designated cargo terminal where they go through laid down processes for safety and security procedures.

“The fact of the matter is that some passengers arrived with cargoes, which they should have passed as cargoes through the cargo terminal, but instead wanted to pass same as mere luggage and FAAN decided to charge them the cargo fee, which is a normal charge that is done with receipts.

“We wish to stress that it was not the passengers’ luggage that was charged, but cargo, as the affected passengers arrived with an average of eight bags of cargo. The passengers should have passed the cargoes through the cargo terminal instead of coming with them.”

He explained that the charge on cargoes was not new, adding that “the charge has always been in FAAN’s books and was part of the fees collected by the concessionaire, Pan Express Limited. But now, FAAN has decided to collect the charge and there is no need mixing it up with luggage.”

“The authority wishes to reiterate the earlier warning to cargo agents to desist from this unwholesome practice or face the full wrath of the law as no form of blackmail will deter us from carrying out our mandate of providing services at internationally acceptable standards and practices,” Dati added.