Accept a Yoruba leader or go back to Igboland, Ladipo Traders told by Lagos State Govt. 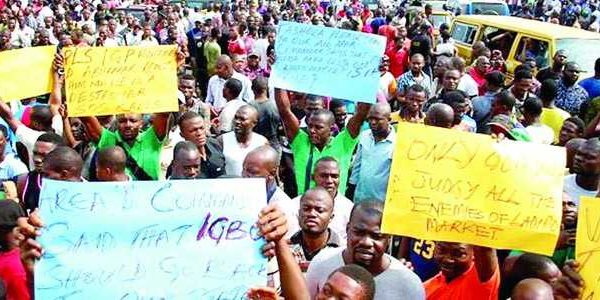 The crisis rocking the leadership of Ladipo Auto Spare Parts Market, Mushin, took a new dimension on Thursday as the executive members of Ladipo Central Executive Auto Dealers Association and some of its members took to the streets protesting the imposition of Alhaji Oladotun Abibu Oki as the Babaloja of the market.

LACEC and its numerous supports had on Thursday launched an attack on the Alhaji Oki led administration over what they described as an attempt to impose his authority on them. Alhaji Oki had organised some of his loyalists to clean the environment

during the weekly environmental sanitation but were attacked by the aggrieved members of the LACEC who claimed that he was encroaching on their territory.

Addressing the protesters, President General, LACEC, Comrade Ikechukwu Animalu said that the union rejected the imposition of Alhaji Oladotun Abibu Oki as the new Babaloja of Ladipo general market. ” Out of the 34 existing units in the market, Alhaji Oki controls only a unit. There is still an on going battle over his appointment as the new Babaloja. It was his attempt to impose his authority on us that led to the crisis that erupted on Thursday. We demand a formal election, so that the people will decide who their leader will be.

“We also appeal to the police to be fair in this controversial matter and call to order those who openly ordered us to either accept the imposition or return to our various states.”

On what led to the fight on Thursday, LACEC Secretary General, Pastor Steve Paul Ijioma said: “There has been controversy over the imposition of Alhaji Oki as the Babaloja. This led to several clashes and it was agreed that Alhaji Oki should restrict his authority in his unit pending when the matter is sorted out. During the environmental sanitation, he encroached on our territory and we resisted. The protest is to pass the message across that we do not want his leadership rather a free and fair election should be conducted. It is a pity that an Area Commander could openly ask us to accept Babaloja or return to our various states.”

Also at the protest was the royal father of the market, Chief Michael Nwosu who also said: ” 99 percent of marketers in Ladipo are Igbo. To be fair to all, he should come and contest if elected he will be accepted.

“We appeal to the South East governors, Igbo leaders across the globe to come to our aid. They asked us to go back to our villages, if we are not ready to accept the leadership of Alhaji Oki. We pay our taxes in Lagos and have every right as Nigerians to buy and sell anywhere in the state.”

When Saturday Sun visited Alhaji Oki’s section of the market, it was littered with broken bottles and the two cars allegedly destroyed during the fracas. He said that he was ready to dialogue with aggrieved members of LACEC to find a way forward. “I was nominated two years ago to be installed the Babaloja of the market. LACEC through several petitions frustrated that move and the process was delayed. However two months ago, the late Abibat Mogaji finally installed me. To pass their message across they did not attend my installation, which was held in June 27, 2013.