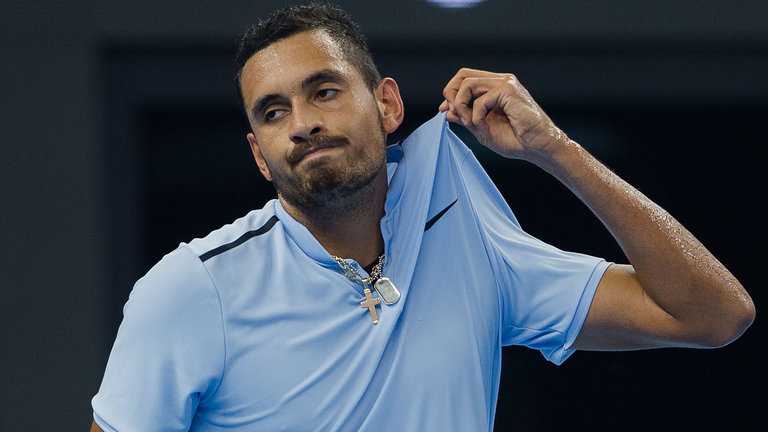 Nick Kyrgios has been fined £7,500 and lost £16,000 in prize money for unsporting conduct following his retirement in the Shanghai Masters.

The volatile Australian, who reached the China Open final last week, stormed off the court during his first-round encounter against Steve Johnson on Tuesday.

The 22-year-old was met by boos and jeers following his decision after he lost the first set on a tie-break against his American opponent.

Kyrgios was not allowed to collect his prize for taking part in the Masters 1000 tournament because he failed to get signed off in order to prove he was unwell or injured.

The Australian, who has also pulled out of his scheduled doubles encounter alongside partner Lucas Pouille on Wednesday, took to social media to offer a reason for his action.

In a statement posted on Twitter, which has since been deleted, he indicated he had been suffering from a “stomach bug” and that he had sustained a shoulder injury during practice ahead of his match against Johnson.

He wrote: “Guys I want to apologise to the fans in Shanghai and those that watched around the world on TV today.

“I’ve been battling a stomach bug for the last 24 hours and I tried to be ready but I was really struggling on the court today, which I think was pretty evident from the first point.

“My shoulder started to hurt in the practice today, which didn’t help either, and once I lost the first set I was just not strong enough to continue because I’ve not eaten much for the past 24 hours.

“I’m hoping to be okay for the doubles and will make a decision tomorrow morning, hopefully off of a good night’s sleep, which I didn’t get last night! I’m gutted to be honest as I was keen to keep the good momentum that I built in Beijing going and finish the year strong. I’ll do what I can to make sure I do.”

The world No 21 was also involved in an apparent disagreement with the watching public and received a point penalty for the second match running because of his on-court behaviour.

The Next Gen ATP Finals in Milan and season-ending extravaganza World Tour Finals at London’s O2 in November end another memorable year which will be covered via our website www.skysports.com/tennis with live blogs and updates as the season reaches its climax