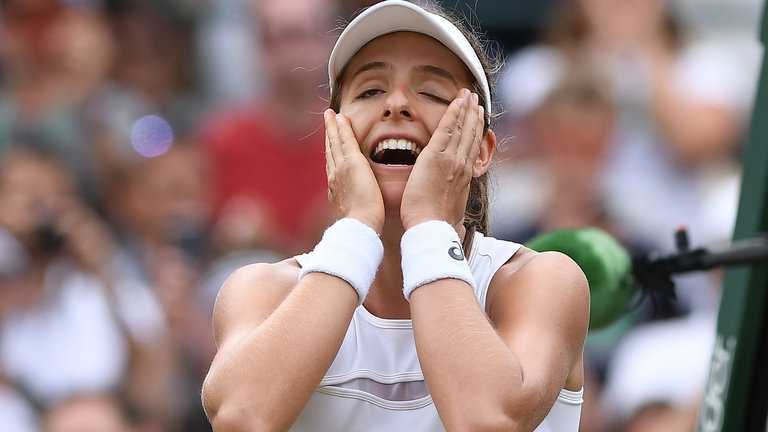 After Johanna Konta became the first British woman to reach the Wimbledon semi-finals since Virginia Wade in 1978, we chart her spectacular rise to stardom.

Konta is the first British woman since Wade and Jo Durie to crack into the elite of the women’s game and she has maintained her sizzling form at Wimbledon.

She had previously won only one match in five Wimbledon appearances. But after racking up her fifth in this tournament, she now finds herself facing five-time champion Venus Williams for a place in the final.

Konta has been on a rollercoaster ride over the last two years, which has seen her climb the rankings up from 146th in the standings to world No 7.

In April she took home £937,000 in prize money after winning the Miami Open title with a 6-4 6-3 victory over Caroline Wozniacki.

Konta’s status as a genuine contender to win a major tournament is credit, in part, to her mental resilience.

Last January, Konta became the first British woman for 33 years to reach a Grand Slam semi-final when she made the last four at the Australian Open, replicating Durie’s run at the 1983 US Open.

She is smashing records and the next landmark facing her in Grand Slams will be Wade’s 1977 mark – the last British woman to reach a Grand Slam final when she won Wimbledon.

In July last year, she claimed her first WTA Tour title at the Bank of the West Classic in Stanford with a 7-5 5-7 6-2 win over Venus Williams.

Although she bowed out in the last 16 of the US Open in September, Konta narrowly missed out on the year-end WTA Championships, but began 2017 by winning the WTA Apia International in Sydney, proving to her rivals that she is a genuine title contender and then came further success in Miami before her latest run to the last eight at Wimbledon.

Here, we list a few things you should know about Konta…

Konta was born in Sydney to Hungarian parents. Her dad is a hotelier and her mum a dentist. She speaks both English and Hungarian.

She was facing growing determination from Australian fans to claim her as one of their own. “I think the announcer on court tried to get the crowd involved,” Konta said, following her scintillating third-round victory over Wozniacki at the Australian Open this year.

“He said, ‘Is she from Great Britain? Is she from Australia?’ I’m like, ‘this is kind of awkward’.

“But yeah, my place of birth is no secret. Also where I call home is no secret either. Everyone’s pretty clear where they stand with me.”

Konta moved to England and based herself in Eastbourne in 2005, aged 14. She qualified as a British citizen in May 2012 and soon started competing for Great Britain. In 2014, she switched her training base to Gijon in Spain working with her Spanish coaches Esteban Carril and Jose-Manuel Garcia.

Her first Wimbledon appearance came courtesy of a wild card in 2012 and she showed her propensity for being able to go the distance in matches, eventually losing 10-8 to Christina McHale in a deciding set in the first round.

She reached the last 16 of a Grand Slam for the first time in 2015 when – ranked 97 in the world – she knocked out seeded pair Garbine Muguruza and Andrea Petkovic en route to the fourth round of the US Open, where she lost to two-time Wimbledon champion Petra Kvitova.

The British No 1 has won 11 ITF titles and four ITF doubles titles during her career won her first WTA title on the main Tour last July and collected her second in Sydney this January. With the £937,000 cheque from the Miami Open as well as the £147,000 accrued for reaching the second week of Wimbledon, she is well on her way past the £2m mark in career prize money.

Resilience and the ability to close out matches under pressure was once a regular weakness in Konta’s game and her transformation was aided by the help of Juan Coto, her former ‘mental coach’, whom she had been working with since October 2014, until the news of his sudden death in November.

The Eastbourne-based player sprung a major surprise by splitting with Spanish coach Carril a month later and then bought in one of the women’s tour’s most experienced coaches in Wim Fissette at the start of the year.

World No 1 Andy Murray is excited to see the progress made by Konta and will be keeping a close eye on how far she goes in the game.

“She finished last year extremely well and kind of showed that she had the potential to get there with the wins that she was having,” Murray said.

“But it’s not easy to do it over a 12-month period. It’s exciting to see kind of how far she’s going to be able to go.”

Konta is now a perennial WTA Tour finalist and after sealing the most prestigious title of her career in Miami, she will set her sights on continuing her rapid progress with more success. Can she win the coveted Wimbledon title?

For those on the move, we will have Wimbledon covered via our website skysports.com/tennis and then click through to our dedicated section skysports.com/tennis/wimbledon. On the move? Head to our app for mobile devices and iPad, or follow our Twitter account @SkySportsTennis to join in the conversation. Who will win the All England Club titles this summer? Have your say…