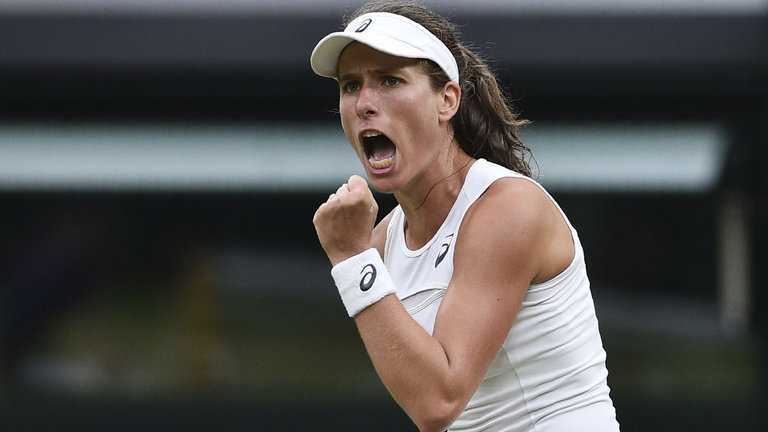 Not since Jo Durie in 1984 has Britain had a female representative in the last eight and Konta is hoping to become the first home winner of the Wimbledon women’s title since Wade in 1977, and the tennis legend was among those in the Royal Box watching the action under the Centre Court roof.

Halep had extra motivation of her own as a victory over Konta would have made her the new world No 1 and she quickly opened up a 3-0 lead before the Briton managed to get on the board.

Some massive hitting on both flanks allowed the sixth seed to win 12 out of the next 14 points to level the first set up at 4-4. The inevitable tiebreak ensued, but Konta was left facing an uphill battle after the wily Romanian romped away with it 7-6 (7-2).

Konta, 26, had to come through some tough battles against Donna Vekic and Caroline Garcia on the road to the last eight, and was determined to take it the distance.

And when a tight and tense second set went to another tiebreak it was Konta who forced a final set decider with a trademark deep cross-court backhand which proved too hot to handle for her opponent.

Konta had won their previous meetings in Wuhan and Miami in three sets and it was no surprise to see them slug it out for a third time.

The sixth seed was the first to make the breakthrough in the fifth game which she consolidated with a hold of serve for a 4-2 advantage. And Konta held her nerve to seal victory in surreal circumstances when a loud scream midway through the final rally at 40-15 ended with Halep patting her forehand into the net after two hours and 38 minutes of high-octane action.

Halep’s defeat means Czech Karolina Pliskova, who lost in the Wimbledon second round, will replace Angelique Kerber on top of the WTA rankings.

Williams’ 73-minute masterclass on Centre Court clinched a 6-3 7-5 victory that made her the most senior player to reach the last four since Martina Navratilova in 1994.

World No 11 Williams, beaten in this year’s Australian Open final, is chasing a first major title since winning the title here in 2008. She will also climb back into the top 10 thanks to her run, but breaking her sister Serena’s record to become the tournament’s oldest champion in the Open era is her sole focus now.

“I love this game. That’s why I put in the effort and the time. It’s a beautiful game. It’s been so good to me,” Venus said. “The competition keeps you growing. You have to get better if you want to stay relevant. I love the challenge. It’s not always easy dealing with the pressure. It’s only you that can have the answer.”

For those on the move, we will have Wimbledon covered via our website skysports.com/tennis and then click through to our dedicated section skysports.com/tennis/wimbledon. On the move? Head to our app for mobile devices and iPad, or follow our Twitter account @SkySportsTennis to join in the conversation. Who will win the All England Club titles this summer? Have your say…