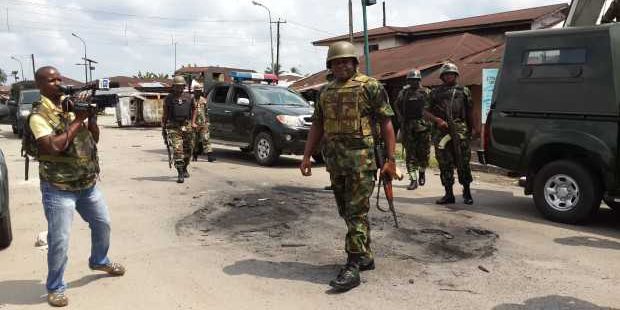 The discovery of the weaponry followed an intense push by men of the Sector 1 Command of the JTF to rid the Urhobo town of remnant of the ragtag army purportedly led by Ibruvwe, who was arrested in Port Harcourt, Rivers State, on September 25.

The Nation learnt that no fewer than 10 of Kelvin’s gang members, including his second and third in-command, Mr. Rufus Ovwigho (aka Don Jazzy), who succeeded Kelvin after his arrest and Ezegbe Ogheneruno (aka Commander Kelly) had been killed since the operation to rid the area of criminals began.

Also, 12 members of the gang, including a member of the team which abducted a security expert, Dr. Ona Ekomu, have been arrested.

A dilapidated storey building located off Market Road in the heart of the town was captured by the JTF during a bloody shootout, which lasted from the early hours of last Thursday till Saturday.

The volume of arms and ammunition recovered from the building could not be ascertained, but our visit to the town yesterday showed that troops have taken over control and secured it with no fewer than 10 military checkpoints manned by stern-looking soldiers in strategic locations.

The Commanding Officer of the 3 Battalion, Lt.-Col. Ifeanyi Otu, who spoke with reporters in the deserted town yesterday, said the internal security operation to rid the area of criminal and ensure security of life, property and to create a conducive environment for lawful activities had been carried out.

He said: “This internal security role has been carried out by the synergy of officers and men of the services, mainly the Army, the Navy, the Air Force and the Department of State Services (DSS).”

Although Lt.-Col. Otu was silent on the number of casualty, if any, resulting from the bloody duels, a source in the team, which confronted the gang members, told our reporter that they were armed with sophisticated weapons and ammunition.

“They (youths) took position on storey buildings and fired at us for several hours. It was clear that they wanted to regain control of the community. We overpowered them and tightened our hold,” the military source added.

A community source, who spoke on condition of anonymity, said at least two members of the gang were gunned down, while others, who sustained gunshot injuries, were taken away from the scene by their members.

However, the JTF boss lamented the activities of some of the community’s leaders, who he accused of encouraging the criminal activities of the group, stressing: “The conspiracy of silence maintained by the community leaders and especially its elders fanned the embers of these criminals. It also encouraged the establishment of a kidnap/militant groups led by Kelvin Ibruvwe.”

The Nation’s visit yesterday showed that Kokori had become like a ghost town as over 95 per cent of its inhabitants had fled the community in the wake of the recent bloody clashes between troops and members of the armed gang. Nearly all the houses in the communities’ main quarters were empty.

Scenes of destruction and carnage dotted the town: windows and doors were smashed. Over 50 cars and motorcycles were either destroyed or burnt. One of the victims was said to be a visitor, who drove his girlfriend to the town on Friday. His car was burnt as used to barricade the main road leading to the Egba Shrine in the centre of the town.

The shrine was still smouldering yesterday. JTF sources said troops were engaged in an hour-long gun fight with the gangs, who took cover at the shrine before they were overpowered. The shrine was believed to render the militants invincible and bulletproof.

The masterminds of the latest destruction were a subject of debate between the community leaders and the JTF authority.

Residents accused troops of looting shops and houses in the wake of the abandonment of the town by residents and criminals. One of the leaders, who spoke with our reporter, said his house was among those looted.

However, Lt.- Col. Otu debunked the allegations, saying: “The allegation of destruction and looting of property by the troops is not true. The daily administration is closely monitored by five officers; discipline is maintained as one is not unaware of the possible fallout in an operation of this nature.”

He said the allegations were meant to draw sympathy from those who knew nothing about what was going on in the town before the current situation, adding: “It is an attempt to undermine the good work the troops are doing in Kokori, aimed at restoring law and order in a community, which hitherto drifted towards anarchy.

“The headquarters of Sector 1 under the command of Brig.-Gen. Pat Akem has the backing of the state government to maintain law and order and restore normalcy in Kokori. It is on record that the rate of kidnapping and armed robbery has reduced in Edo and Delta states following the ongoing operations,” he added.

Otu appealed to the indigenes to cooperate with the troops in the ongoing operations to restore normalcy.