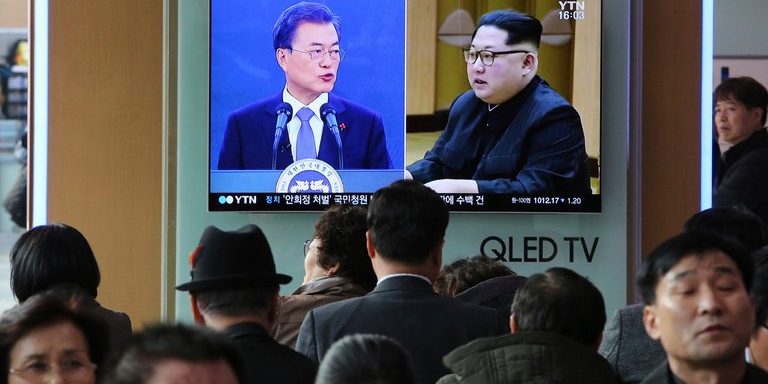 SEOUL, South Korea — Kim Jong-un, North Korea’s leader, plans to formally announce his willingness to denuclearize his country when he meets with President Moon Jae-in of South Korea this month, an official from the South said on Tuesday.

The statement is expected to be part of a joint declaration that the two leaders will adopt when they meet on April 27, said Mr. Moon’s chief of staff, Im Jong-seok. Negotiators from both Koreas have agreed on a rough framework for the joint declaration, he said.

They are still discussing other aspects of the joint statement, such as whether the two Koreas would commit to holding further summit meetings on a regular basis, Mr. Im said. South Korea is also trying to persuade North Korea that Mr. Moon and Mr. Kim should hold a joint news conference at the end of their meeting in Panmunjom, the so-called truce village on the inter-Korean border.

When Mr. Chung and Mr. Suh visited Mr. Kim last month as Mr. Moon’s special envoys, Mr. Kim told them he would be willing to discuss giving up his nuclear weapons if his government no longer felt threatened militarily and its security was guaranteed.

“Although the special envoys have already confirmed a willingness to denuclearize, it will make a difference if the two heads of state will meet and more clearly confirm it and make it a formal statement,” Mr. Im told reporters on Tuesday.

More talks are needed to determine how specific the declaration would be about denuclearization, said Mr. Im, who is in charge of South Korean officials preparing for the summit meeting. But he said the joint statement would be broad and fairly “abstract,” because any substantial deal on the North’s nuclear weapons must be struck between Mr. Kim and President Trump.

Mr. Trump has said he plans to meet with Mr. Kim in May or early June to try to persuade him to dismantle his nuclear weapons program. Mr. Moon, whose envoys brought Mr. Trump the message that Mr. Kim wanted to talk, has tried to be a mediator between the American and North Korean leaders, viewing his own meeting with Mr. Kim as laying the groundwork for the more important one to follow.

North Korean and United States officials have also been engaged in talks in preparation for their leaders’ meeting, during which American officials have said the North reaffirmed a willingness to discuss denuclearization. But it is still unclear what Mr. Kim would seek in return for abandoning nuclear arms, and whether those demands would be acceptable to Washington.

When Mr. Kim met with President Xi Jinping of China late last month, he called for “phased” and “synchronized” implementation of any denuclearization deal. Under such an approach, which North Korea has sought in past talks about its nuclear programs, the North would dismantle its program in stages, with each one met by an incentive, like an easing of international sanctions.

Some American hard-liners reject such an approach, saying that the North has no real intention of giving up nuclear weapons and is only seeking relief from sanctions. John R. Bolton made that argument before Mr. Trump chose him last month to be his national security adviser.

According to South Korean officials and analysts, Mr. Moon hopes for a “comprehensive deal,” in which Mr. Kim commits to dismantling his nuclear arsenal and Mr. Trump reciprocates with security guarantees for the North, including normalized ties and a peace treaty with Washington.

“When our special envoys visited Pyongyang, the mood was not bad, and we understand that the North Koreans and the Americans are both engaged in sincere discussions, so we are optimistic about the inter-Korean summit,” Mr. Im said. “But we could face obstacles any time.”