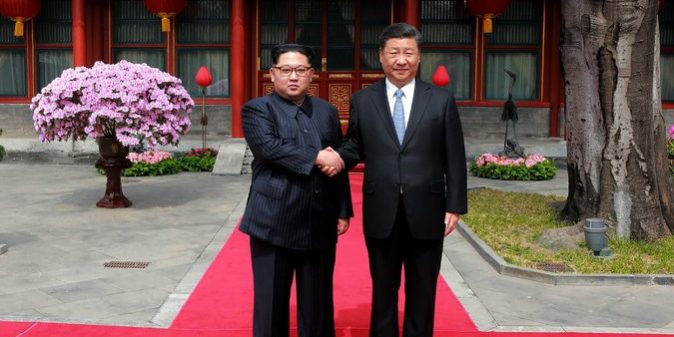 1. Confident, reasonable, and willing to bargain.

It was Mr. Kim’s first known trip abroad since taking power — and it could strengthen his hand going into talks with the U.S. Here’s how the Chinese and North Korean news media covered the meeting.

President Trump was quick to chime in. He posted on Twitter that Mr. Xi told him that the meeting went “very well” and that Mr. Kim “looks forward to his meeting with me.”

2. A lawyer for President Trump broached the idea of pardoning two of his former top advisers, Michael Flynn, above, and Paul Manafort, with their lawyers last year, according to three people with knowledge of the talks. But the lawyer, John Dowd, who resigned last week, denied it.

The discussions were said to have taken place as the special counsel was building cases against both men — and they were weighing whether to plead guilty and cooperate.

Separately, the special counsel released a document showing that Rick Gates, a top Trump campaign official, had repeated communications in the final weeks of the election with a business associate tied to Russian intelligence.

President Trump announced that he had chosen his personal physician, Adm. Ronny L. Jackson, as the new secretary of veterans affairs.

Above, the two men shaking hands after Mr. Trump’s physical in January. Dr. Jackson had said the president was in “excellent health.”

4. Atlanta’s city government was brought to its knees for five days by a ransomware attack — one of the most sustained and consequential cyberattacks ever mounted against a major U.S. city. (Above, an activity that does not require internet connectivity.)

Digital security experts identified the assailants as the SamSam hacking crew, a well-known group that is believed to have extorted more than $1 million so far this year. And they say the episode makes clear that local governments need to make digital security a top priority.

Hundreds of demonstrators flooded into Sacramento City Hall on Tuesday evening to protest the death of Stephon Clark, who was fatally shot by the police in his grandmother’s backyard as they investigated a vandalism complaint. They fired 20 times. He was unarmed.

Xavier Becerra, the state’s attorney general, announced that his office would oversee the investigation into Mr. Clark’s death and would review the department’s training and protocols.

6. A top Morgan Stanley broker was repeatedly accused of violence against ex-wives and girlfriends, and his employers found out about it. Yet Douglas E. Greenberg remained one of the firm’s top financial advisers — and a celebrated member of the wealth management industry.

Above, boxes of documents and a threatening letter that one woman received after she wrote about the abuse on Facebook. After we contacted Morgan Stanley with questions about Mr. Greenberg, the bank put him on “administrative leave pending further review.”

7. April 4 is the 50th anniversary of the assassination of the Rev. Dr. Martin Luther King Jr.

The Lorraine Motel in Memphis, where the killing occurred, is now the National Civil Rights Museum. And on that day, it will open a special exhibition comparing contemporary movements with King’s Poor People’s Campaign and other efforts in support of workers.

As we prepare our coverage, we’ve been asking readers for their reflections on the assassination, and we’d like to hear from more of you.

8. Our economics writer says this spring’s home sales season is shaping up to be the most interesting one in years.

Changes in tax law and higher mortgage rates might slow home sales. Yet demand is up and supply low in many areas, which could have the opposite effect for purchases and prices.

9. A waiter in Canada was fired for being rude to customers. His defense? He’s French.

Guillaume Rey is accusing his former bosses of cultural discrimination in a formal complaint with the British Columbia Human Rights Tribunal.

French waiters do have a reputation for being snobby or even surly. Mr. Rey contends in the filing that he was fired because of his “direct, honest and professional personality” and high standards, which he learned in France.

“‘The earlier you strike, the more damage you can do:’ I think that’s a horrible strategy for keeping peace in the world,” Mr. Noah said. “Although it is a great strategy for tackling an all-you-can-eat buffet.”

Speaking of feasts, this Sunday is Easter for many Christians (and Palm Sunday for the Orthodox). Here are our top recipes for the holiday, from ham and lamb to homemade Peeps and Easter Egg Nest Cake, above.

Passover also starts on Friday evening. In honor of both holidays, our Books desk put together a shortlist of titles that grapple with religion and spirituality.