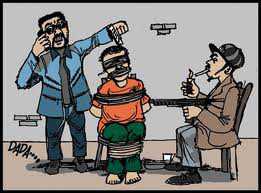 Imo State Police Command, has with the assistance of villagers, smashed a gang of dare-devil kidnappers that recently abducted

Vanguard investigations revealed that the woman was kidnapped from her home by the hoodlums but later saved miraculously by a twist of luck.

A villager, who spoke on strict grounds of anonymity, told Vanguard that “the vehicle used during the operation by the gangsters broke down along the Agbaja-Umuelemai road.”

It was also gathered that faced with this development, the hoodlums forced their victim out of the vehicle and moved her into the nearby bush.

“The hoodlums were still working out how to effect repairs on their vehicle till dawn. The presence of the strange vehicle in the area attracted strong suspicion, especially as news of the kidnap had spread like wild fire,” the witness recounted.

Consequently, the villagers raised alarm, which attracted young men in the community and the police was quickly alerted.

“Since the vehicle they saw fit the description of the one used by the kidnappers, the villagers strongly suspected that the hoodlums and their victim must be somewhere within the vicinity,” the witness said.

It was also gathered that a manhunt for the fleeing gangsters paid off as one of the hoodlums was arrested in the bush.

“His confessional statement led to the arrest of two other members of the gang. The suspects were later moved to the state Police Headquarters, Owerri, for further investigation,” said the witness.

Speaking to the early callers to the family home, the husband of the victim, Nze Livinus Onwuzuruike, thanked God for saving his wife from the ordeal and the police for acting very fast when the matter was reported to them.