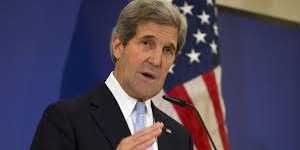 The U.S. Department of State said in a statement that the delegation would also attend the Global Summit to End Sexual Violence in Conflict also to hold in London.

The statement said t the delegation to the international summit would attend the summit from June 11 to June 13.

“The delegation to the summit from the United States will be led by Secretary of State John Kerry.  The London Ministerial Summit on Boko Haram is a continuation of the May 17 Nigeria Security Summit in Paris. Peace and security in Nigeria is one of our highest foreign policy priorities in Africa.

“And this summit will underscore the need for a comprehensive, regional approach to countering terrorism, while emphasising civilian security and respect for human rights,’’ the statement said.

It said the U.S. Under-Secretary of State for Civilian Security, Democracy and Human Rights, Sarah Sewall, would be on the delegation.

The statement said Ms. Sewall would speak at a session of the opening plenary of the Global Summit to End Sexual Violence in Conflicts.

It said the session would focus on the roles of states and political actors in addressing sexual violence in conflicts and post-conflicts.

The statement said the U.S. Assistant Secretary of Bureau for African Affairs, Linda Thomas-Greenfield, would also be on the delegation.

The delegation also included senior officials of the Department of State and the U.S. Agency for International Development and Ambassador-at-Large for Global Women’s Issues, Catherine Russell.

Others are Ambassador-at-Large for War Crimes Issues, Stephen Rapp and Special Envoy for the Great Lakes Region and the Democratic Republic of Congo, Russ Feingold.

The delegation will also include principals of the Bureau of Population, Refugees and Migration and Bureau of International Organisation Affairs.