Kerosene shortage in Nigeria is a national humiliation 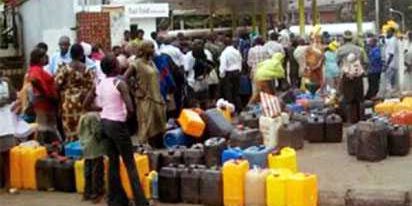 The Chairman, House Committee on Petroleum Downstream, Hon. Dakuku Peterside, has described the lingering kerosene scarcity across the country as a national embarrassment.

Dakuku made the statement in Calabar, Cross River State, during his committee’s oversight visit to Pipelines and Products Marketing Company, PPMC, and other private oil facilities in the city.

Peterside, who spoke with officials of PPMC, marketers, retailers and consumers of kerosene, said the prevailing scarcity of the product is not only an embarrassment, but also a denial of basic rights of the ordinary Nigerians who bear the brunt of national challenges such as this.

He said: “This scarcity is a national embarrassment and with every reported case in any part of the country, we feel diminished as a people. Therefore, we must address it because it is unacceptable. Our people should not suffer; there is no reason to suffer in the midst of plenty.

“For me, the big question is: where has kerosene been disappearing to despite huge importation by the government?”

Peterside maintained that the availability of Kerosene should be taken for granted by Nigerians, especially those in the low income group who have suffered this unusually long scarcity of the product.

However, Peterside commended the management and staff of North-West Petroleum and Gas Company, for making kerosene available by going the extra mile.

He urged the company to sustain this service which has greatly reduced the burden of sourcing the product in Calabar metropolis and beyond. He also visited the company’s mega station in Calabar, where he interacted with consumers of the product who had formed long queues at the filling station prior to his arrival.

At the Calabar office of PPMC, independent marketers, who spoke through their chairman, Mr. Michael Udofia, said: “kerosene is only available in private depots and it is sold to us at very exorbitant prices.”

He pointed out that this was why it is difficult to sell the product at government approved prices to end users.

Peterside later addressed some retailers who came to protest to members of his committee about the lingering scarcity of kerosene in Calabar and its environs.

He gave the assurance that the lawmakers cannot afford to look the other way while Nigerians suffer. “We are going to urgently set up a sub-committee to address this issue, I can assure you.”

The Committee also visited the Calabar Free Trade Zone, where he stressed the need for Nigerians to take interest in manufacturing since this is the only way of accelerating the nation’s economic growth.

The chairman and members of his committee had earlier paid a courtesy call on the Governor of Cross River State, Senator Liyel Imoke. The Governor had commended the committee for its efforts in addressing challenges in the downstream sector of the petroleum industry.