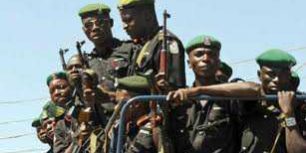 Police said yesterday that the war against crime in Kano State was bearing fruits with the arrest of 3,241 suspects for various crimes between January and June.
Crime statistics released by the Commissioner of Police, Mr. Musa Daura, during a press briefing at the Bompai Headquarters of the state police command showed that out of this number, 273 suspects were apprehended for armed robbery and other violent crimes, while assorted dangerous weapons were recovered from them.
Daura listed weapons seized from the suspects to include two AK47 rifles, 60 rounds of live ammunition, nine locally made pistols, and 47 cartridges, huge scissors, cutlasses and house-breaking implements.

The commissioner also disclosed that 52 robbery cases were recorded while 30 vehicles of different make, 98 GSM handsets, jewellery, pumping machines, electric generators, cables and fuses from vandalised Power Holding Company of Nigeria, PHCN, installations, among others.
He said: “A team of policemen, while on patrol along Zaria Road, intercepted two men, Sa’adu Abdullahi and Ismail Ishaq, both from Jigawa State in a Toyota Camry car, suspected to have been stolen.
“On further scrutiny, pumping machine, one electric generator, two rolls of hose and other house-breaking implements primed for suspected vandalism of pipeline along Dakasoye village, Garum Mallam Local Government, were discovered. The suspects confessed to the crime.”
Daura recalled that a gang of seven armed men during the period attacked nine different houses in Sheka/ Maidele quarters and robbed the occupants of their valuables.
He said all the suspects were arrested and were assisting the police in their investigation into the incident, while a five-man motorcycle snatching syndicate was also smashed by the command.
The commissioner expressed gratitude to Kano State Government for the support it had been rendering to the command especially in its campaign against criminals as well as other sister agencies in the state.
He noted that without their cooperation, there was little the command could have achieved in its war against crime.
Daura also commended the residents of the state for giving timely information to the police on the activities and movements of suspected criminals and urged with them not to relent.