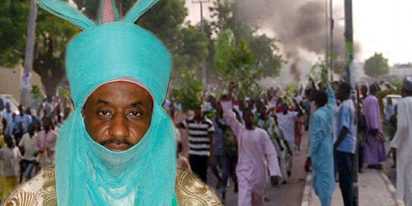 Violent protests, yesterday, greeted the announcement of the former Governor of the Central Bank of Nigeria, Sanusi Lamido Sanusi, as the 14th Emir of Kano. The throne became vacant last week Friday following the death of the former Emir, Alhaji Ado Bayero.

Making the announcement, the Secretary to the Kano State Government, Rabiu Zakariya, said: “I have the honour to announce that after a careful study of the Kingmakers’ selection and advice, we have chosen the former CBN Governor, and the Dan’Majen Kano, Sanusi Lamido Sanusi as the new Emir of Kano”.

The Secretary to the state Government was flanked by the four Kano kingmakers that included the Sarkin Bai, Sarki Dawaki Mai’Tuta, the Madakin Kano and Makaman Kano.
Making the announcement, the Secretary to the Kano State Government, Rabiu Zakariya, said: “I have the honour to announce that after a careful study of the Kingmakers’ selection and advice, we have chosen the former CBN Governor, and the Dan’Majen Kano, Sanusi Lamido Sanusi as the new Emir of Kano”.

The Secretary to the state Government was flanked by the four Kano kingmakers that included the Sarkin Bai, Sarki Dawaki Mai’Tuta, the Madakin Kano and Makaman Kano
The new emir, Alhaji Sanisu Lamido Sanusi defeated the trio of his uncle, and senior counsellor of the Kano Emirate council, Alhaji Abbas Sanusi, the late emir’s eldest son, and Chiroma Kano, Alhaji Sanusi Lamido Ado Bayero, and Alhaji Tijjani Hashim for the exalted stool.

Reacting to the emergence of the former CBN governor as the new Emir of Kano few minutes after his name was announced, hundreds of irate youths, yesterday, took over major streets in the ancient city protesting Sanusi’s choice. The Protesters who carried tree branches, sticks and some dangerous weapons, chanted war songs demanding a reversal of Sanusi’s choice.

The protesters were shouting “ Bamaso Bamaso” which means “we don’t want” around the emir’s palace and environs as motorists scampered for safety during the ensuing pandemonium.

It was learnt that the protests started at the emir’s palace by people suspected to be sympathetic to late Bayero’s son who were already celebrating a rumoured appointment of the Chiroman Kano.

The youths made bonfire along major highways and on major streets. The protest later spread to Fagge area of the metropolis as well as quarters like Kuramawa, Soron Dinki, Kofar Nassarawa, Gwale and Chrianchi.

However, a combined team of soldiers and policemen chased away the protesters from major streets, while Sanusi Lamido Sanusi’s residence was heavily guarded, while troops have been deployed to guard government buildings in the city.

Commenting on the development, the Police image maker in the city, Mahaji Musa Majia told Vanguard that ‘“we have security challenges, but I can assure you that we are on top of the situation”.

Meanwhile, Governor Babatunde Fashola of Lagos State, yesterday, said that the emergence of Mallam Sanusi as the new Emir of Kano, would further cement the bond between the people of Kano and other citizens of the country.

Fashola in a congratulatory message signed by his Special Adviser on Media, Mr. Hakeem Bello, wished Sanusi long and fruitful reign as he assumed office as the 14th Emir.

The governor said that the election was a deserving feat for the former CBN helmsman.

According to Fashola, “the new Emir’s tenure as CBN Governor officially ended two days before the former Emir, Alhaji (Dr.) Ado Bayero passed on after 50 years on the throne.

“His assumption of the throne is, in a way, “keeping a date with destiny” because he has, for a long time, wished it as his next assignment after leaving the CBN job.

Fashola said: “I hoped that his emergence would further cement the long standing bond between the people of Kano and their brothers and sisters in Lagos and across the country with whom, they have been living in peace and harmonious relationship.”

Fashola noted that Sanusi endeared himself to the Nigerian public for his brilliance, courage, professionalism and tact during his tenure as the CBN governor.

He stated that his tenure as CBN governor was very eventful and quite useful to moving the country forward.

Praying that the reign of the new Emir would bring lasting peace and progress to the country, the Governor wished him long life and congratulated the people of the ancient City, the Governor and the government of Kano and Nigerians generally for making the right choice.

Also, Ogun State Governor, Senator Ibikunle Amosun, has congratulated the new Emir of Kano. Amosun, hailed the choice of the banker and erstwhile governor of the CBN, who he said would bring his wealth of experience to bear in the appointment.

In a statement signed by his Senior Special Assistant on Media, Mrs Olufunmilayo Wakama, Amosun urged the Emir-Elect to follow in the footsteps of his predecessor by bringing further development to the Emirate and the State as a whole.

“As an accomplished technocrat, I believe the new Emir will use his influence to foster peace and attract more development to the emirate and indeed the State,” the governor said.

He expressed happiness at the choice of the new Emir and prayed Almighty Allah to grant him the wisdom and understanding to discharge the functions of the exalted and revered office.

Governor Ahmed in a congratulatory message said the emergence of the former Governor of the CBN as the new Emir of Kano was a positive development for the traditional institution in Nigeria.

Governor Ahmed was optimistic that the new Emir will bring his wealth of experience to bear in sustaining the eminence of Kano in Commerce and other sectors in Nigeria and West Africa.

He prayed Allah to give the new Emir long life and good health in his new position.