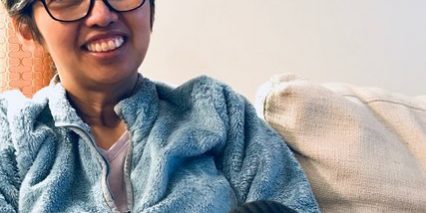 Julie Yip-Williams, whose candid blog about having Stage IV colon cancer also described a life of struggles that began with being born blind in Vietnam and her ethnic Chinese family’s escape in a rickety fishing boat, died on Monday at her home in Brooklyn. She was 42.

Joshua Williams, her husband, said the cause was metastatic colon cancer.

Ms. Yip-Williams’s richly detailed blog, which she started writing after receiving her diagnosis in 2013, was more than an account of her siege with cancer. It was also a meditation on love and family as well as a message of openness to her young daughters, Mia and Isabelle, about her illness.

Ms. Yip-Williams wrestled with hope, which she cursed as an “illusory sentiment.”

“Cancer crushes hope, leaving a wasteland of grief, depression, despair and a sense of unending futility,” she wrote in 2014, adding: “Hope is a funny thing, though. It seems to have a life and will of its own that I cannot control through the sheer force of my mind. It is irrepressible, its very existence inextricably tied to our very spirit, its flame, no matter how weak, not extinguishable.”

Her blog, with additional material written by Ms. Yip-Williams, is being turned into a memoir by Random House, which expects to publish it later this year or early next year.

“What makes Julie’s story distinctive is that she approached cancer consciously,” Mark Warren, her editor, said in a telephone interview. “She did not deny it. She didn’t engage in happy talk. She thought this experience and this book might have something to teach people about facing hard truths, and would be an exhortation to the living.”

Her story also attracted the attention of “CBS Sunday Morning,” which televised a profile of her this month. During the segment, which was taped in late January and early February, Ms. Yip-Williams’s younger daughter, Isabelle, explained to the CBS correspondent Tracy Smith why she wasn’t too young to discuss her mother’s cancer openly.

“Because it’s actually happening in real life,” said Isabelle, who is 6, “and you don’t know how it feels like.”

Ms. Yip-Williams was born Diep Ly Thanh on Jan. 6, 1976, in Tam Ky, a city that was part of South Vietnam until the country’s unification with North Vietnam later that year. (The name Yip is the Chinese equivalent, rendered in English, of the Vietnamese name Diep.)

Congenital cataracts caused her blindness, and to her paternal grandmother, the family’s matriarch, the little girl’s condition meant that she was an unwanted burden and had no future.

When she was 2 months old, her father, Diep The Phu, who later became known as Peter, and her mother, the former Lam Que Anh, who is called Ann, took her to an herbalist in the coastal city of Da Nang with instructions from her grandmother: Kill her with one of his concoctions.

But the herbalist refused the gold bars he was offered, and Julie came home to her angry grandmother.

“She would have found another way to kill me,” she wrote on her blog in 2014, “but my great-grandmother got wind of her daughter-in-law’s endeavor from her Da Nang home and commanded that I be left alone: how she was born is how she will be.”

She was 28 when she learned of her near-death in infancy — which she called “The Secret” — after her grandmother’s death.

In early 1979, 3-year-old Julie and about 50 members of her family boarded fishing boats from Vietnam for a monthlong journey to Hong Kong with little food or water. They were among the thousands of so-called boat people who fled in the aftermath of the Vietnam War. Upper-class families like Ms. Yip-Williams’s had their assets confiscated by Vietnam’s Communist government.

After several months in a refugee camp, Julie, her parents and her brother, Denton, flew to San Francisco in November 1979 and soon afterward to Los Angeles. There, at what is now the UCLA Stein Eye Institute, she underwent surgery that gave her vision for the first time. But she remained legally blind; she needed thick eyeglasses and a magnifying glass to read small print and was not able to drive.

Her older sister, Lyna Yip, who arrived in the United States with two of her uncles ahead of her parents, sister and brother, also had surgery to remove cataracts but emerged with better vision. The family settled in Monterey Park, a suburb of Los Angeles. Ms. Yip-Williams’s father became a wholesale vegetable buyer and her mother a manicurist.

Join a deep and provocative exploration of race with a diverse group of New York Times journalists.

Ms. Yip-Williams received a bachelor’s degree in English and Asian Studies from Williams College in Massachusetts and graduated from Harvard Law School.

She joined the law firm Cleary Gottlieb in New York in 2002 and specialized there in corporate governance and mergers and acquisitions.

Reflecting on her acceptances to Williams and Harvard Law and then being hired by Cleary, she said at a fund-raising event sponsored by the law firm in 2014, “I never felt like I belonged in any of these fine institutions: a poor immigrant girl who wasn’t that smart but was willing to work hard, rubbing elbows with America’s elite.”

Besides her husband, who is also a lawyer, she is survived by her daughters, parents, brother and sister.

In a blog entry written last July, she addressed her daughters, telling them about the instructions she had left (from “who your dentist is” to “when your school tuition needs to be paid”) and the videos she would make (“about all the ins and outs of the apartment”).

But she also had blunter, yet inspiring, things to say, about loss and the unfairness of life.

“You will be deprived of a mother,” she wrote. “As your mother, I wish I could protect you from the pain. But also as your mother, I want you to feel the pain, to live it, embrace it, and then learn from it. Be stronger people because of it, for you will know that you carry my strength within you. Be more compassionate people because of it; empathize with those who suffer in their own ways.”

And, she wrote, “Rejoice in life and all of its beauty because of it; live with special zest and zeal for me.”

A version of this article appears in print on March 23, 2018, on Page B12 of the New York edition with the headline: Julie Yip-Williams, Who Wrote About Love, Family and Cancer, Dies at 42. Order Reprints| Today's Paper|Subscribe