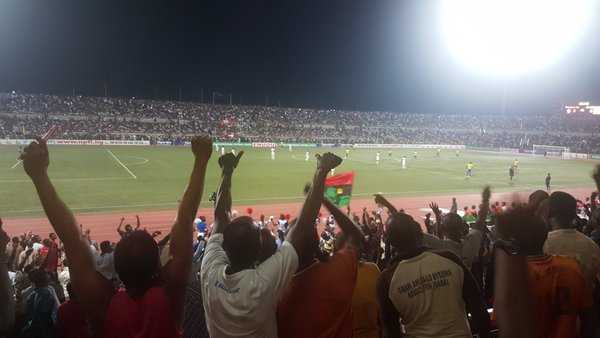 On Friday, 20th of May 2016, in the packed 22,000 capacity Nnamdi Azikiwe Stadium in Enugu,during the Oriental derby clash between the host, Enugu Rangers versus Heartland of Owerri, an euphoria was felt that has never been felt in any stadium in Biafraland. The excitement was not propelled neither by a goal or a dazzling show of skill by the football players, but by a honorable gesture by a Biafran football fan who stood up from his seat in the stadium and raised a Biafra flag. Encouraged by the loud ovation he received for his action, he was escorted by few Biafrans towards the tarmac, where he gallantry raised the Biafra Flag and began a lap of honour round the stadium amidst loud cheers and shouts. “All hail Biafra”, “Biafra my country”, “Biafra is here”, “Biafra or Death” “Release Nnamdi Kanu”, etc, rented the air and fireworks went on display. The players and match officials were startled but the match was not disrupted and went on peacefully and ended in a goalless draw.

The Nigeria brown envelope media purposely blanked out the report in their match reportage and updates, but the fact remains the incident was electronically recorded and it is on the Internet for everyone to watch.

The significance of what has happened in the Enugu stadium is a testament, of the awakening of Biafrans by Mazi Nnamdi Kanu, and they are determined to continue to strive for the restoration of the sovereign state of Biafra. The over 20,000 football fans who celebrated the raising of the Biafra flag in the stadium are under the command and control of Mazi Nnamdi Kanu,the leader of Indigenous People Of Biafra(IPOB), and the Director of Radio Biafra/ Biafra Television. Nnamdi Kanu is still been unlawfully incarcerated even after two courts of competent jurisdiction has ordered for his unconditional release. President Muhammadu Buhari has sworn to jail Nnamdi Kanu,and he also said he will rather drown than for Biafra to be restored. In a previous article, I have told Buhari to seek the counsel of Oba Rilwan Akiolu of Lagos state, on the best lagoon to drown and I still stand by it.

This is a beginning of what will become a recurring incident in stadiums in Biafraland during any sporting events. Biafrans must not be intimidated because they are raising the flag of their nation, and not guns and deadly weapons like the Hausa/Fulani in the North. It should be recalled that on the 4th of May 2016, when Enyimba International Football Club of Aba on Wednesday beat hosts Kano Pillars FC 2-1 in a rescheduled Match Day 7 fixture in the 2015/2016 Nigeria Professional Football League (NPFL). Immediately the referee blew his whistle signifying acceptance of the winning goal by Eze Otorogu of the Aba team,players and officials of Kano Pillars objected refusing to go on with the match. As the stalemate lasted, fans of Kano Pillars took over the entire pitch throwing missiles.  Not even the intervention of the Nigerian Police Force who fired several cans of tear-gas could calm the frayed nerves as players, match officials and spectators scampered in various directions to safety. The team driver of Enyimba of Aba was severely injured while trying to escape the rampaging Hausa/Fulani hooligans.

Biafrans in Enugu stadium has shown passion for the struggle inhibited in every true Biafran, already the discussion of Biafra is on the lips of everyone including Buhari. Shops are been painted with Biafra flag colours, Biafra flag is flying in most homes in Biafraland,vehicles proudly display Biafra insignia, it is now a pride to be called a Biafran. The Biafra Heroes Remembrance Day on May 30th, will be a showcase of the resoluteness of true Biafrans. The 50th anniversary of the genocide on our people shall be a solemn reflection on those murdered during the Biafra Genocide of 1967-1970 and those murdered by the Nigeria Islamic armed forces for protesting peacefully. Our freedom is at hand and we must remain resolute. Biafra is an ideology, nobody can defeat her.