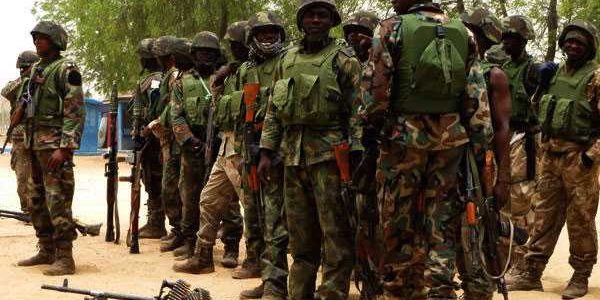 “At about 11:35 hours on 13 September, 2013, some troops of Banki Forward Operating Base (BFOB) on a mission of 202 Battalion Bama, on their way back to Banki, a border town with Cameroun Republic, encountered some Boko Haram terrorists along Bama-Banki road carrying out armed robbery activities on innocent traders and travellers.“The troops succeeded in killing many of them during the encounter and saved the traders and travellers.”The above were the words of Lt. Col. Sagir Musa, the spokesman of the newly-established 7th Division, Nigerian Army in Maiduguri, the Borno state capital in a statement made available to newsmen on the renewed threat and tactics employed by Boko Haram as a means of survival following their dislodgement from their various camps within and outside the state.

The statement further stated that the Boko Haram terrorist camps in some parts of Borno State had recently come under heavy fire that forced many of the terrorists who escaped to look for food from villagers.

According to the statement, the terrorists have also resorted to robbing innocent civilians and killed three passengers after collecting unspecified amount of cash and food items from them in their recent attacks on victims along Bama-Banki road.Lt Col. Musa said an intelligence information at their disposal also indicated that the terrorists have written threat letters to trader at the Dikwa market demanding N1 million to enable them purchase food items and other logistical requirement or be ready to face deadly attacks.