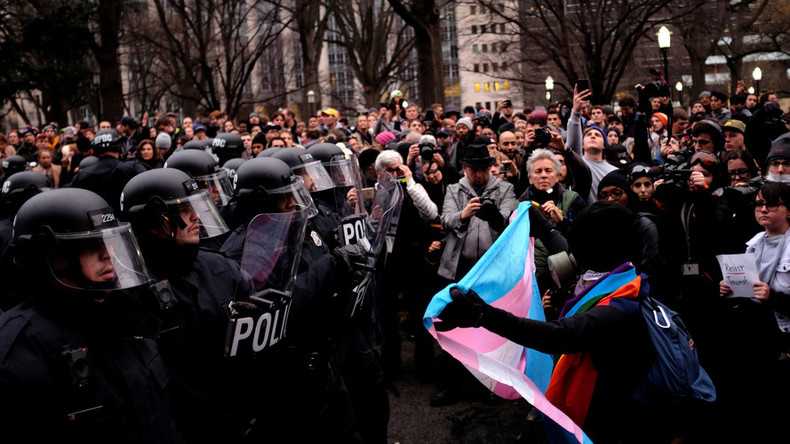 Aaron Cantu, a staff writer at the Santa Fe Reporter, was one of around 230 people arrested during protests on January 20, including six other journalists who have all had their charges dropped by February, according to the Reporters Committee for Freedom.

Cantu accepted an October 15, 2018 trial date and entered a plea of not guilty, according to the Monitor. Cantu will have a motion hearing on April 6, 2018 and a status hearing October 27, 2017.

According to the indictment obtained by the Monitor, “Cantu, and other individuals participating in the Black Bloc, brought face masks, gas masks, and goggles to eliminate or mitigate the effectiveness of crowd control measures that might be used by law enforcement.”

However, the Santa Fe Reporter says that video footage from the conservative media group The Rebel shows Cantu was “off to the side of the protests with other journalists, washing what appears to be pepper spray from his eyes.”

The indictment does not name Cantu as the cause of any of the destruction, only that he was “present while the damage happened,” according to the Santa Fe Reporter.

Olivia Cappello of Dead City Legal Posse, a logistics and financial support group for the defendants, told RT that the courts were overrun with around 60 defendants during Cantu’s arraignment on Friday. Cappello said they were divided into four groups for status hearings that also included the setting of trial dates.

Superior Court Judge Lynn Leibovitz set up trial dates with eight defendants each day, saying, “Clearly we can’t try 215 people at one time,” according to the Monitor.

Today looked like something out of the 1971 film Punishment Park. https://t.co/hE5nUTJ3W3

The defendants face an “unprecedented prosecution,” Mara Verheyden-Hilliard, a human rights attorney and co-founder of Partnership for Civil Justice Fund, told RT in an interview set to air Monday.

“We have not witnessed mass charges of this nature, charges that are completely inappropriate,” Verheyden-Hilliard said.

Defendants are under pressure to take plea deals for lesser charges and sentences, but Verheyden-Hilliard advises against giving into what she feels is a ploy “to crush a growing social justice movement.”

“The basis by which the government is prosecuting hundreds of people who protested Donald Trump’s inauguration is not that they themselves engaged in illegal activity,” Verheyden-Hilliard added. “It’s really that they engaged in lawful journalistic activities, lawful free speech activities.”

According to Buzzfeed, more than 100 of those arrested have committed to a “Points of Unity” statement, pledging to reject any plea deals that “cooperate with prosecutors at the expense of other codefendants.”

Last week, a grand jury indicted Cantu on eight felony charges, including inciting a riot, rioting, conspiracy to riot and five counts of destruction of property, according to the Santa Fe Reporter.

“Aaron is an experienced journalist who disclosed this pending case during the hiring process,” Julie Ann Grimm, editor and publisher of SFR, said. “We stand behind him and look forward to his continued good work in his new home in Santa Fe.”

Outrageous & chilling is right. Know this: We at @SantaFeReporter stand w/@aaron_con_leche & are excited about more of his great reporting. https://t.co/ziLkD4GHMN

In February, the Reporters Committee for Freedom sent a letter to acting US Attorney Channing Phillips, who is overseeing the case, in defense of Cantu.

“Journalists are not above the law and have no right to incite a riot or engage in acts of assault or vandalism,” Bruce Brown, the executive director of the organization, said. “But being near a newsworthy event is no crime for anyone, reporters included. Journalists routinely run toward the center of any action, so they can better serve the public by reporting an event they personally witnessed, rather than something recounted by bystanders.”